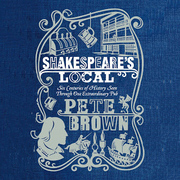 Pete Brown, author of three best-selling social histories based around beer, returns to the pub with his latest book Shakespeare's Local, which hits the shelves on 8th November.

It has also been selected as BBC Radio 4’s Book of the Week in the week before Christmas, guaranteeing its place in the stockings of book-lovers around the country.

Shakespeare’s Local: Six Centuries of History Seen Through One Extraordinary Pub is the story of the George Inn, Southwark, the last surviving galleried coaching inn in London. It reveals how the pub, as well as playing a key role in the development of Elizabethan theatre, was also close to the birth of English literature (Geoffrey Chaucer's Tabard stood just next door) and has its own dubious poetic claim, having been immortalised by the leading (possibly only) exponent of Stuart-era Fart Poetry. The George also counted Charles Dickens among its many fans.

Pete knows his beer as well as his history, so it's going to be a great night. There will, of course, be beer (and maybe some wine) available on the night.

This is a FREE EVENT, although contributions for the refreshments would be appreciated.

"DO IT YOURSELF!" - Creative Re-Work

Started by Collage Artspaces in Community News and Information 18 hours ago. 0 Replies 0 Likes

Started by Stephen Middleton in Items offered - for sale or for free. on Monday. 0 Replies 0 Likes

Van Cortlandt Park: The “Mecca” of the Running Worldby Jilleen Barrett - The Quadrangle