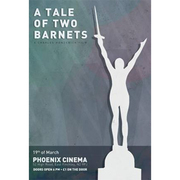 A documentary film about people in a London suburb in the year 2012.  Barnet, site of the famous workhouse from the story Oliver Twist. Two hundred years after the birth of Charles Dickens, how has the area changed and how has it stayed the same? The people of Barnet talk about their lives and their concerns in 2012.

See the official website or view the trailer below:

RSVP for Film Showing - A Tale of Two Barnets to add comments!