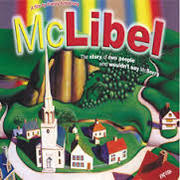 McLibel: - The Tottenham postman & gardener who took on the McDonald’s corporation. And won.

February 2015 marks 10 years since this infamous and historic marathon of a legal battle concluded at the European Court of Human Rights.

The McLibel case had been a David and Goliath story of two people, Tottenham residents Helen Steel and Dave Morris. The defendants refused to be silenced by libel threats, and had to represent themselves throughout what became the longest trial in English legal history. At the same time a grass-roots global defiance campaign turned the spotlight on junk food, exploitation of workers, unethical targeting of children, environmentally-unfriendly business practices, the cruelty of factory farming - and attempts at censorship. The leaflets that the corporation tried to suppress became probably the widest circulated in history.

This documentary film made during the case tells the incredible story.. the filmed testimony of witnesses and experts, exposure of controversial practices, revealing footage of secret meetings with McDonald's US Board members, McSpies unmasked, the growing protests, McProfits down...

Helen and Dave - the McLibel Two - introduce the film and look back on the case and the victorious campaign.

Started by Haringey CCG in Community News and Information on Friday. 0 Replies 1 Like