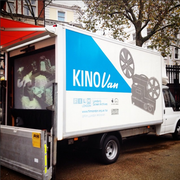 On 12th March 2015, London’s Screen Archive will be screening films of the borough of Enfield from its unique KinoVan (cinema van) at the Market Place, Church Street.

Films on show include recently digitised footage of the Edmonton Charter Presentation, 1937 which hasn’t been seen for over 70 years and other gems of the area.

The films will be screened from Film London’s KinoVan*, a unique cinema-on-wheels designed to take London’s film history out on the road
and screen it in public spaces like Market Place. A film archivist from London’s Screen Archives will introduce the films and, alongside Local Studies experts, will explain how the films fit into Enfield’s history
and reveal more about the rich shared past they represent.

The event marks the launch of a search for more local films to add to the archives, particularly from Enfield itself which is currently underrepresented compared to areas like Southgate. The public are invited to search and donate films showing life in the borough, from birthday parties to days out to footage of people in their homes, to share with future generations.

The KinoVan will be there from 1pm until 4.30pm