An idea for the trains

I had an idea about those busy trains to Moorgate, and have just sent it to the train operator to see what they say. I thought I'd gauge opinion here too, to see if anyone thinks it would help as much as I do! Here's most of what I've said (minus the pleasantries):

"As you’re hopefully aware, [the service between Bowes Park and Old Street] can be extremely busy during rush hour. As you also may agree, the design of the trains is not that helpful to the volume of people using them; there isn’t much space between the seats for people to stand, and it’s quite hard to get to the seats. Compared to tube trains, which have more doors per carriage, passengers have significantly more difficulty getting on and off. Compared to tube trains, I see more conflict between passengers: people shouting at each other, people refusing to move to allow others on/off etc.

"I wondered if, given all of this, you would consider the following suggestion: at busy times, would it make sense to have one of the doors on each carriage designated for entry, and one for exit?

"I think this would reduce conflict (directional and verbal) between passengers, and facilitate a more efficient flow of people through the carriages. It would also surely speed up station time as people wouldn’t be moving against each other; this might then contribute towards reduced delays. I think it could in theory make the trains run more efficiently, and improve customer satisfaction.

"As I say, it would only need to be during peak hours. Doors could simply be marked with, for example, a sticker indicating whether they’re to be used for getting on or off. I also don’t think it would need enforcing as such; there would be an initial process of informing all passengers of the new system, then after this it would enforce itself - people would get used to it, queue in the right place etc."

Just a thought. Happy to hear agreement, disagreement, or even silence!

A waste of time, effort and money, with no staff available people would ignore this, and in my experience there are many commuters who would knock their own mothers out of the way to get on a train.

also don’t think it would need enforcing as such; there would be an initial process of informing all passengers of the new system, then after this it would enforce itself - people would get used to it, queue in the right place etc."

I compare your suggestion with the situation on platform 1 at Winchmore Hill Station further up the line where there is a small waiting room on the southern end of a narrow platform. Passengers persist in wanting the small waiting room knocked down so even more of the passengers will crowd on the platform to board via the door at the front of the train and so they can speed to their offices as they want to be first off the train when it arrives at journeys end at Moorgate.

The problem is symptomatic of a wider deterioration in civility in society.

I thing this is a great idea ... in principle!

Whilst it is not a "one-door-off, one-door-on" policy, a few years ago Transport for London experimented with some tube platform markings to encourage passengers to step aside and let others off before boarding.

I think it had mixed success ...See photograph right  - for more pictures and a contextualising blog post Click Here

At a couple of stations on the Jubilee extension - specifically Canary Wharf and Canada Water - I have witnessed orderly single file queues to board tube trains.

One thing that makes this more sensible is the screened platform edges on the eastern end of the Jubilee Line. Passengers can see where the sliding doors will open to allow access to the carriage - so know exactly where to stand / queue.

Thanks for the views. When I say 'I don't think it would need enforcing', I just mean that it seems (to me) to be of such obvious benefit that people might even get angry at people not following the new system...who knows, though. Sorry for any undue optimism!

I think this would cause more delay, as people would still have to maneuver within the train to get to the "right" door to exit.. and of course, anyone running for a train will dash to the nearest door to board.
People get rude and uncooperative because they feel they are treated like cattle, and everyone is in a hurry to get to work.  A better use of resources would be to add extra carriages to the shorter trains (why on earth are there shorter trains scheduled during peak times?), so that there is more space overall.

The link from Finsbury Park to Moorgate (Northern City L:ine) was constructed to Tube Gauge W6 in 1904 with the trains stabled on tracks on the area of land behind Emirates Stadium. In the years from 2002 the number of passengers has increased substantially, see 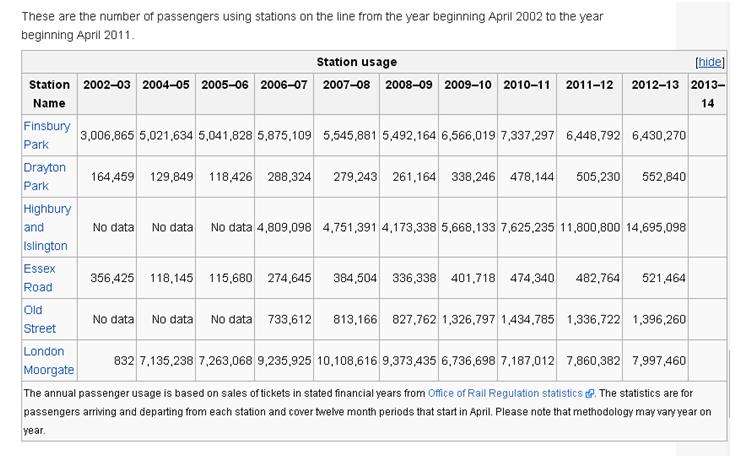 Since Class 313 were designed for use on Great Northern Suburban Inner Suburban services from Moorgate to Welwyn Garden City orHertford North, which included the Northern City section of 'tube' line built to take standard size trains between Drayton Park and Moorgate, they are built to the slightly smaller loading gauge suitable for 750dc power than that used for 25kv pantograph power in conventional trains.

Class 313 Stock was built to a 1972 design constructed in 1976-77 and are limited to 64 three car 232 seat sets which must have seemed to be sufficient capacity when they were ordered 30 years ago.

Blimey!  This is an extremely technical post.  Could you please explain in layman's terms?
I was referring to the fact that sometimes the trains have 3 carriages, and sometimes 6... clearly, both sizes fit onto the tracks/platform, so why not make ALL rush-hours trains of the longer type to decrease congestion?

Blimey!  This is an extremely technical post.  Could you please explain in layman's terms? I was referring to the fact that sometimes the trains have 3 carriages, and sometimes 6... clearly, both sizes fit onto the tracks/platform, so why not make ALL rush-hours trains of the longer type to decrease congestion?

To quote the meerkats, Simples! Passengers using the Inner Surburban Services have increased more than the spare capacity provided b y the British Rail Class 313 were ordered.

You write:  both sizes fit onto the tracks/platform, so why not make ALL rush-hours trains of the longer type to decrease congestion?

As set out in the original answer. There is only a strictly limited number (64) of carriage sets that can be used on the tube section of line. Carriage sets other than Class 313's are NOT normally permitted in passenger service on this route! Your choice: one 6 carriage train to one destination or two three carriage trains from/to different destinations. If Class 317 is used, provided there is a "path" through Kings Cross tunnels  it will currently terminate at the Suburban platforms at Kings Cross. If there is no path the train will terminate at Finsbury Park! Priority for paths given to East Coast trains

I'm also sceptical about whether people would follow the 'rule' and whether it would not slow down the service, as people had further to get to the exit door.  Why not take out some of the seats to allow a bit more standing space?  There would still be plenty of seats for off-peak travellers.  Some of the tube trains have flop-up seats which are, I believe, intended to be put up during the rush hours, so more people can get on, but I do not recall ever seeing them used in this way.

I think the flip-up seats are in case of wheelchairs!

Remember that Piccadilly Line is design to be an "airport" service so that flip up seats on what is known as Metro Cammell 1973 stock can be used for wheelchairs, luggage storage. Flip up seats widen the area inside the carriage and will allow "faster boarding". This is known as "platform dwell time" in railway speak.

Look on the line map on a Picadilly tube train as it will show accessible stations. Certain stations are accessible from "Street to train" and you will see what are known as Harrington Humps on the platforms where the height of platform matches the height of carriage floor and needs no intervention from platform supervisors At certain other stations the flat floor access uses "manually operated humps" and has to be pre-ordered

Started by Lisa Jones in Community News and Information 8 minutes ago. 0 Replies 0 Likes

Started by Anna Maudar in Items offered - for sale or for free.. Last reply by Amanda Terroni 1 hour ago. 2 Replies 0 Likes

Started by Daniel Cowan in Housing Accomodation and Flatshares 2 hours ago. 0 Replies 1 Like