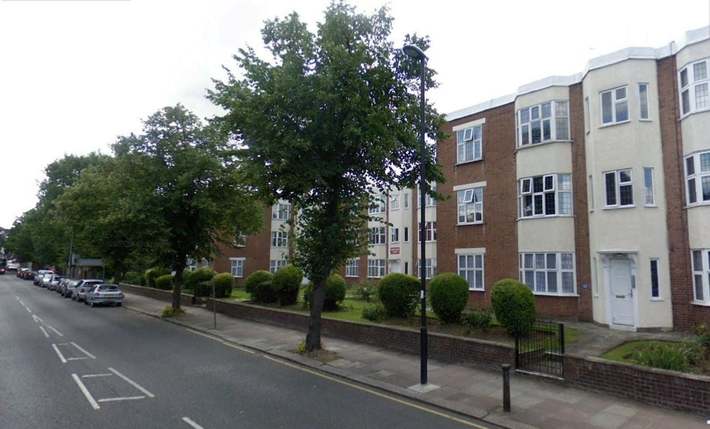 The WWII bomb at Bounds Green which caused the death of 19 civilians in the underground station on 13 October 1940 has been well covered on this and other local websites. However, Brownlow Road suffered heavily from further bomb damage throughout the war. In the then and now photos above (published by Gary Boudier in the Enfield Past & Present in Photos FB page), the blast appears to be caused by conventional high explosives, and it’s likely that this happened during the Blitz of 1940-1.

The article below details the even more devastating impact and casualties of a V2 rocket hit on 14th December 1944, further along down on the opposite side the road towards the A406 (where the Synagogue is now). Typically a V2 blast left a massive crater about 30m wide and 8m deep, and they traveled at a supersonic speed that gave no indication of their imminent arrival. Lest we forget...

I am going to stick my neck out and say i am pretty sure the first photo is the synagogue sight at the bottom of Brownlow road, which is incidentally the same side as the flats but further down.

The flats now occupy what was an empty plot of some sort possibly a football/rugby pitch which can just about be made out from an aerial photo i have some where and i have a low resolution bomb map dated 1944 that shows it vacant devoid of houses.

The flats are almost opposite Goring road and there is no tell tale rebuilding of the houses opposite (I have looked many times) compare the houses opposite the synagogue today and Tewksbury terrace and you see although they have been rebuilt the bricks are different on those houses - they are brown where as the other houses are red, red/yellow.

Below is a photo i lifted from ebay (forgive the size and my sticky fingers) and you can make out it is at the bottom of Brownlow and not where the flats are nearer the top. A search of a bomb damage map again would confirm this.

This photo appears to be taken from an upstairs window perhaps the chemist?

They rebuilt the synagogue and the houses after the war and you see the variation in the style but they occupy the same plot.

I enjoy your history posts Richard and if you are interested please google Tewkesbury Terrace Rocket incident.

V2's had conventional explosive warheads and you heard two bangs, one supersonic and the explosion. 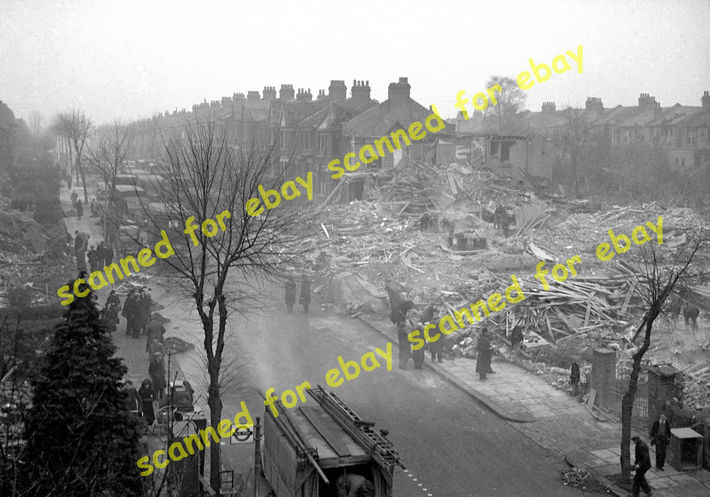 Further to earlier posts, my parents moved into Brownlow Court around 1941. They had the flat at the top hidden by the trees, basically in line wit the end car. They were in bed on the night the V2 raid and Mum recalled that the blast was so severe it lifted the bed nearly to the ceiling and actually cracked the concrete roof. It leaked for ever after that.! As Mum was expecting me, she moved to St Albans after that and spent the rest of the war there.

I lived in the flat from 1945 to 1972 when I married and moved to Woodford Green. The first school I went to from age 5 to about 9 was in a large house in Brownlow Road called Beaumaris. It was on the left hand side of the road next door the the vicarage and run by a pair of dear old ladies. At age 9 Dad thought I had better learn something if I wanted to pass the 11+ so he sent tme to Bowes Road primary and from there to Trinity Grammar school Wood Green, next to St Michaels church. I eventually left school with O levels and entered into  5 year engineering apprenticeship ending up as a Chartered Engineer in the Construction business woking on designs for many major projects such as the Barbican Arts Centre and the London Eye.

and it all started in Brownlow Court!

Would there be an issue if I copied parts of this to post on to the Friends of Broomfield Park website in connection with Remembrance Service on 11 November?

None at all as long as all sources are acknowledged

Hi,Do you remember what the name of Patels Chemist on the corner of Brownlow Road and the North Circular/Bowes Road when this happened.

May have been Underwoods. Maybe not!

That is amazing. We lived in Queens Road (I was born 1946 and lived there until 1958) and our little garden backed onto what may have been these flats. I had no knowledge of these being flattened. They must have built the flats very quickly after the war. Maybe these were not the same flats. The ones I knew were just below the shops which are opposite Bounds Green Underground Station???? Roger