Council Leader, Claire Kober, to step down, new Council to decide on the future of the HDV in May 2018

Before the mainstream media circus attempts once again to fit events in Haringey into their own cherished narratives, here's Aditya Chakrabortty's perspective. He's Tottenham-born and one of the few mainstream journalists to have actually stepped outside the Westminster bubble and researched the HDV on the ground. 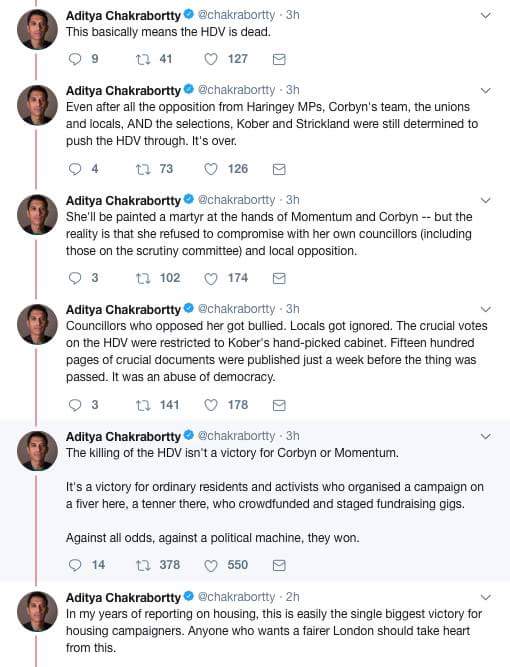 Heard something today on the radio while working so didn't quite catch what it was about.

So its forced out by "sexism, bullying and undemocratic behavior" by Momentum activists.

You just have to make that accusation these days and its believed without question "Kuenssberg" style.

I am sorry to see Claire Kober go.  She has been an excellent leader for Haringey and has changed the council for the good during her tenure.  I can believe all that she says, particularly as there have been repeated reports over the last few months in non-Tory press such as the Guardian.  I suppose posts such as the Kuenssberg comment from a previous poster are only to be expected and merely reinforce Claire Kober’s statement  regarding “sexism, bullying and undemocratic behavior”.

I suppose posts such as the Kuenssberg comment from a previous poster are only to be expected and merely reinforce Claire Kober’s statement regarding “sexism, bullying and undemocratic behavior”.

So you think i am sexist a bully and undemocratic is that it?

Perhaps i am a Corbynista?

I can believe all that she says, particularly as there have been repeated reports over the last few months in non-Tory press such as the Guardian.

And you believe everything you read in the Guardian do you?

Perhaps these people against HDV are sexist bullies and misogynists as well;

We welcome Claire Kober’s decision yesterday to stand down in May and leave the decision whether to proceed with the HDV to the next leader of the council. The decision would have been particularly welcomed if it had been made in the spirit of having listened to Haringey residents.

We are saddened however, that she chose this moment to add, to the well-worn charges that Haringey council has been the victim of a coup by hard left members of the Labour party, the allegations of ‘sexism, bullying, undemocratic behaviour and outright personal attacks’.

The Stop the HDV campaign group is a broad-based group made up of people from different parties and none. The HDV would have affected council tenants, housing trust tenants and home owners and they are all represented in the group. At least fifty percent of the group are women and they have been extremely active in the campaign; organising marches, chairing meetings and speaking on behalf of the group. We have used our democratic right to protest against the HDV, attend public meetings and speak openly about our opposition to this policy which we feel would be devastating to our community. Many women, particularly single parents, would have been adversely affected by the HDV.

Those of us who are members of the Labour party chose to support candidates opposed to the HDV in the democratic selections so that we had candidates who represent our views rather than those who think they know what is best for us. Numerous sitting councillors chose not to fight for their seats.
Many able women have been chosen to stand as Labour candidates in May.

As women, many of us have experienced sexism and we agree that no woman should be subjected to it. However, this campaign has been about Clare Kober’s attempt to impose the HDV not about her as a woman.

Ms Kober, vocal opposition to an unpopular policy which is being implemented in a paternalistic way without proper consultation is not bullying or sexism, it is democracy.

Cober sounds like a nasty piece of work to me she would not compromise with her own councilors, listen to local concerns and when the sky fell in on her plan to hand everything over to a PFI housing deal (which s an absolute con at the tax payers expense) she resorted to blaming "sexism and Bullying"

From Hells heart i stab at thee, for hates sake i spit my last breath at thee

Also Juliet i would familiarize yourself with the so called laura Kuenssberg case before you jump to conclusions and accuse others;

Read the transcript of the conversation between Craig Murray (hes left wing so you ought to believe him) with the 38 Degrees Press Spokesman.

The same BBC that ignored Saturday's huge demonstrations in support of the NHS will today again be highlighting the unsubstantiated claims of bullying and sexism by Claire Kober on the Andrew Marr show. StopHDV (and the leading women within it who have publicly rebutted Kober's claims) have been denied any right of reply. 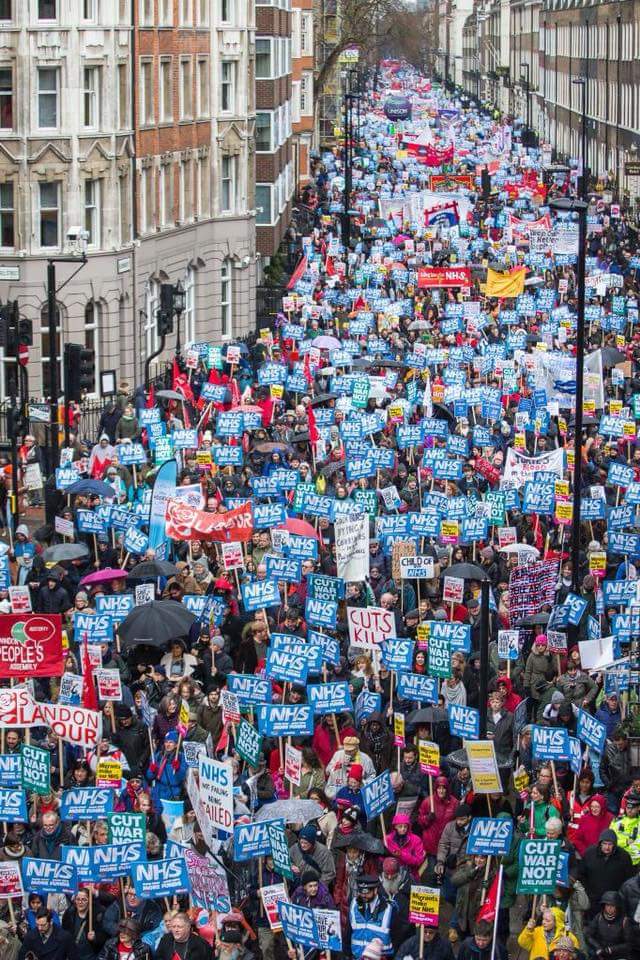 we live in complex times...where what counts as truth is elusive...  Thanks for the posts Richard and Matt

https://www.youtube.com/watch?v=nXcU8x_xK18&sns=em ... maybe this video on empathy can help us to think about why empathy is vital for an effective democracy

Both eloquent and erudite, thank you Liz.

So, to be clear then: Chakrabortty’s piece in the The Guardian (MSM) is fine because he was born and Tottenham and did his research? Nonsense. What evidence do you have that other journalists who may take a different position didn’t do their research? Why is his article fine but other pieces in the MSM are somehow not telling the whole tale? What about the residents who do live in Tottenham who do agree with the HDV or the opponents to HDV who don’t live in Tottenham? I was born in UCH, doesn’t make me an expert on Camden!

For the record, Claire did not make the decision about the HDV on her own. The majority of Labour Group supported and this after many discussions, lots of evidence and consultation with people who live in the area and from experts. You don’t agree with that decision? That’s absolutely your right to do so but please read the paperwork and I hope you will conclude that it wasn’t done on a whim by one person and it isn’t PFI.

“Cober (sp.) sounds like a nasty piece of work to me…..” In fact it sounds like you’ve never met her and so I’m not sure how you reached this conclusion. I’ve known her for well over 10 years and she is anything but and she certainly didn’t get where she is today by being nasty. Other women have disagreed? Great, delighted to see that their experience has been so positive. Surely we aren’t now saying that someone must be making it up because someone says their experience is different?

Some of you have clearly reached a decision about the HDV and so have I. So far, so good. But I have yet to see to hear or see an alternative for the 12,000 families in the borough that are in need and that will tackle this on the scale that is required.