I wondered if there had been a discussion of the ongoing ward boundary review on B&B? If so, I haven't found it. It looks like some rather drastic changes are planned. The first consultation ended in February, and a map from the draft submission by the Council is shown below. This may have been modified before it was submitted, but it looks to me as if the Council's intention is to split off the east part of Bounds Green ward - roughly down the line of the New River? - and move it into Woodside. So Myddleton Road would be split in half:

The reason for reducing the population of the ward is so that Alexandra Ward can be abolished, and about 3k electors moved from there - specifically the triangle on the east side of the railway bounded by Alexandra Park Road and Albert/Durnsford Road - into Bounds Green ward. So the latter would not only be split by the Hertford line, but also by railway lines 1/4km wide running along the south side of Bowes Park!  Doesn't sound to me very feasible, and many residents of Alexandra ward - including me - are seriously alarmed by the proposal (i.e. because of the impracticality of it, and because it would split the community of Alexandra Park).

The reason a ward has to be abolished (apologies if you know all this already!) is that a new one has to be created on the east border of the borough to accommodate the expected increase in population by 2024 from all the redevelopment (particularly in Tottenham Hale). The Council want to keep the current total of 19 wards and 57 councillors, and the Commission support them on this. So one ward has to go.

I notice, however, that before the last boundary review in 1999, there were 23 wards and 59 councillors, and the Council suggested reducing the number because the population of Haringey was expected to decline (!). The Commission supported them on this.

Many people in Alexandra have, I think, only become aware of the boundary review in the last 3 or 4 weeks. The Commission are due to present their draft recommendations on 28 May, when residents can comment on it. This final consultation will conclude on 5th August.

I forgot to mention another small group of roads that would be moving into Bounds Green ward, if the Council's draft scheme were adopted - Bidwell, Winton, Wroxham, Tunnel Gdns and part of Blake road. But these would not be impacted by an impassable 1/4km width of railway lines.

This would be a shame, as it would split Bowes Park into three - Bowes Ward in Enfield and Bounds Green and Woodside in Haringey - it would potentially make getting things done for the local community that much more difficult. At least the commercial part of Myddleton Road would be solely in the Bounds Green ward.

In case you haven't seen it, the Boundary Commission duly published their draft recommendations on 28 May, and although these are a bit different from the Council's, they include the main issues for Bounds Green and Alexandra Ward mentioned above. i.e.splitting off the east part of Bounds Green ward - roughly down the line of the New River - and moving it into Woodside. So Myddleton Road would be split in half. And abolishing Alexandra ward, moving over 3k electors into Bounds Green - so they would then make up a third of the ward. Further info., including how to respond to the recommendations, here:

The consultation closes on 5 August, with the final recommendations published in early September.

Truro and Nightingale Road would also be split in two.  I can see the logic as there is already a bit of a natural divide  with these two as with Myddleton Road.   However Finsbury Road would be split down the middle of the road!  Seems a bit daft to me.  I think the problem/solution lies with who is elected as Councillors.  If they are people who take on the problems of the whole area not just a small part which is Commercial then its OK.  However if you have one part of a ward which is very vociferous this can work against other areas which might not be so good as voicing their concerns and problems.  They would also have to work closely with the Councillors at the other end of the road.  I suspect no one has asked those living in Finsbury Road what they think!  I will try and find out the views of Nightingale Road residents and perhaps someone can do the same for Truro.

When we had a lot of imput into the layout of the roads Haringey and the local Councillors were very helpful.  If there was a similar issue then double the number of people would need to be involved.  As Truro, Nightingale and Myddleton all are rat-runs form The High Road any changes at the west end of these roads would certainly impact on the east end of the roads.  For that reason I think I would ask the Myddleton Road Group and Bounds Green Community Association to oppose them, as I will. 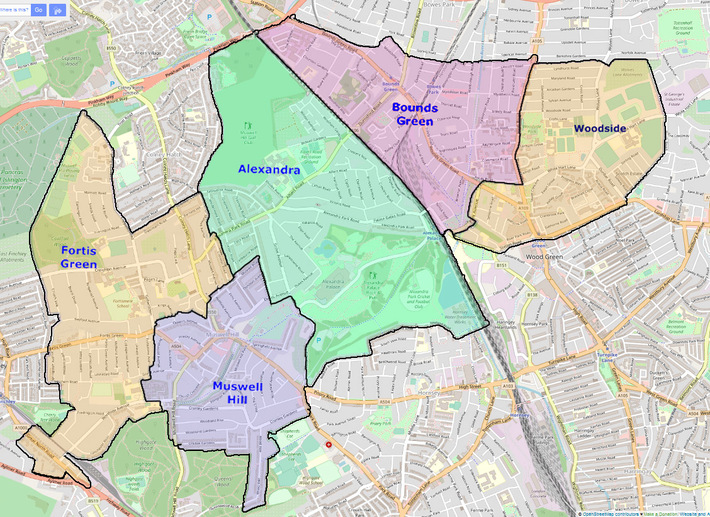 It does sound problematic, Kate! I do, however, think it is worth offering alternative proposals to the Commission, because (a) they have been known to change their recommendations in the past in reponse to the stated opinions of locals, and (b) there is a strong case for putting forward an alternative proposal. I have worked out what I think is a more viable alternative to the Commission's proposal, which does not involve making any alterations at all to the current Bounds Green ward (nor does it involve abolishing Alexandra!). Anyone is welcome to use my alternative ward map to submit to the Commission, giving their own arguments as to why they prefer it to the Commission's. btw the LGBC have to do something about reordoring ward boundaries, so one cannot simply say that we do not want their proposal.

Here's a link to the map, how to submit it to the Commission, and some info. and arguments - though some of the latter will not be relevant to Bounds Green.  Deadline 5 August.

btw any map submitted to the Commission needs to be based on careful calculations of electorates.