The Prince Pub: An Asset of Community Value 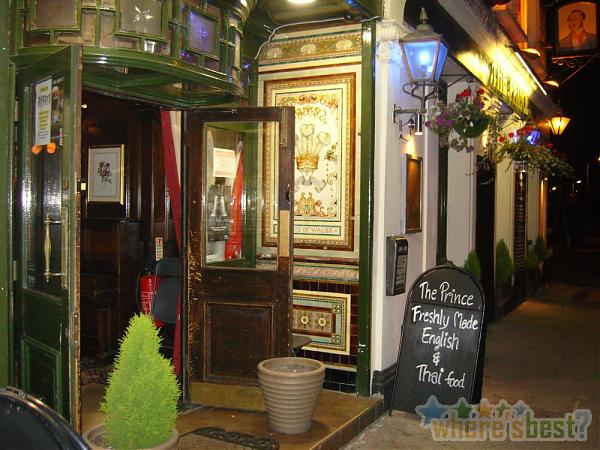 Following our recent discussions about the Prince Pub on the corner of Finsbury Road and Trinity Road a formal application for listing the premises as an Asset of Community Value has been prepared by Richard Matz.  A copy of the application is available to download.

Now, to complete the formal application, we need a minimum of 21 site members based in Haringey or an adjacent borough to sign-up and confirm their support.

We have a simple and secure online system  - please add your name address and postcode information to this simple online form, and show Haringey Council how much support there is locally to preserve this building as a local community asset.

This is music to our ears! We used to live closer to Highgate and used to love going to the Dukes Head... It was our fave! :)

They are advertising for staff...

"great beer, food and strong links to the local community" - all my prayers answered! Fantastic!

We are giddy with delight! Last time we were in The Duke's Head we said to each other that it would be a dream come true if The Duke's Head crew took over The Prince....YAY. Licenced Victualler, Clifford Charles Dixon (1871 - 1923) is listed at 1 Finsbury Road on the electoral register for 1906 and also in the 1911 Census along with his Cockney wife, Julia Alberta Dixon (née Gibson), both listed as aged 39 at that time. They were married in 1897 and do not appear to have had any children. His birth place is listed as Guernsey in the Channel Islands. The couple previously appear in the 1901 Census running The Grapes public house in Cripplegate (under what is now the Barbican complex).

Eight ‘servants’ are also listed at 1 Finsbury Road in 1911 including a manager, a cellerman (John Gibson – probably Julia’s older brother), 3 barmaids, an assistant potman* and two domestic servants. Julia continued to run the pub long after her husband’s early death and is she still listed on the electoral register as residing there in 1948. However, by 1951 she had moved to Northbrook Road in Bowes Park. She passed away in 1956 aged 89.
(* potman - a man employed in a public house to collect empty pots or glasses)

That's a fantastic link, Martin! Time to raise a glass to some of the other lost pubs on our patch:

Bricklayers Arms, Thomas H Farmer, 1 Edith Road, New Southgate N11 (Middlesex Public Houses in  in a 1937 Directory). R. Markell, 1 Edith Road, Bounds Green, New Southgate N (This is a listing from the Beer Retailer section of the UK North London Post Office Directory in 1896; This is one of the earlier London Suburbs directories that lists Pubs and street addresses as London instead of the local county.) A real mystery this one! Albert Pinching mentions this pub (on the estate behind The Springfield Tavern). Scant records reveal it was open from 1896 to 1965 and demolished for housing redevelopment in 1968. APPEAL FOR PHOTOGRAPHS – please post if you have any!

Finsbury Arms, Joseph Wainwright, 65 Truro Road, Wood Green (Beer Retailer section of the UK North London Post Office Directory in 1896.). Joseph Wainwright (aged 58) and his 51 year old wife, Matilda, are listed as living at 'The Finsbury Arms' in the 1891 Census, along with their 15 year old niece, Kate Green. Instead of their occupation being listed as 'Licenced Victualler' the couple are described as 'Ale, wine & sprit dealers'.

No pub or publicans are listed in Truro Road in the 1881 Census. However, 44 year old Licenced Victualler William Morgan and his 28 year old spouse, Annie, are listed as living in Truro Road (no mention of the pub) in the 1871 Census. In the early part of this century, this was being operated as a grocery shop but is now entirely residential. This suggests the sight may have spent much of its history running as an off-licence rather than a pub. Its design is very similar to The Prince:

Alexandra Tavern, Charles Thos. Burry, 33 Commerce Road, Wood Green N 22 (Middlesex Public Houses in the 1937 Directory). Also known as Motts. The Licenceeship was passed down through generations of the Burry family from 1878 to 1937 (maybe beyond - more genealogy on this to follow). In its heyday, it would have been right at the commercial & retail heart of Wood Green (then centred on the Finsbury & Commerce Roads) It closed in 2003 and was later demolished and built over. I member visiting it once and it was in a terrible dilapidated state of decay. I only wish I had  the foresight to photograph it as I can’t remember anything about the architecture. APPEAL FOR PHOTOGRAPHS – please post if you have any!

The Fishmongers Arms (later O'Rafferty's) at the end of Trinity Road has been redeveloped into a police station with flats above (sobs!). The adjacent Bourne Hall, a famous music venue with an equally long & illustrious history, was also demolished and replaced by housing:

The Nightingale Hotel/Tavern. A grand old edifice dating from 1866 that used to stand on the High Road corner with Nightingale Road with an adjacent Masonic Hall. Demolished c1970, it was replaced by a single storey and rather charmless shack of a pub with a rough-house reputation. This has now also been demolished and occupied by housing.

Have I missed any?

Signs of life today. Work being done.Very good news all round!

New planning regulations that came into effect on 23/05/17 now require a full planning application and community consultation before a pub can be demolished or converted to other use. In effect, the Asset of Community Value safeguards that we previously had to apply for are now a statutory requirement. I'm glad we didn't wait for this development in listing The Prince as an ACV in 2015 as it might have come too late and support for our campaign was a key factor in persuading the Highgate posse to invest. Mine's a pint of N1 - Slainte!