Top 10 Things To Do In The Borough of Enfield

I bit the bullet and created a post for Londonist about the top 10 things to do in Enfield. We're working our way around the boroughs. Did I do ok? It's an eclectic list but I hope it makes Enfield sound good. Would love to know whether you agree with my selections and statements - I don't feel a very well qualified Enfieldian!

Link to post on Londonist. I've copied the article below:

TOP 10 THINGS TO DO IN THE BOROUGH OF ENFIELD

Our tour of the boroughs reaches the northernmost — the one which bears a heraldic beast that shares its own name. Welcome to Enfield. 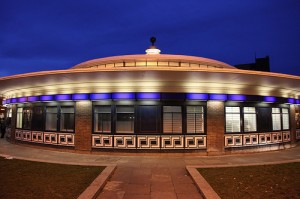 Best museum: The Whitewebbs Museum of Transportis the driving force behind the annual Pageant of Motoring on Enfield Playing Fields. Its collection of veteran vehicles lives in an 1898 pumping station which originally housed two steam engines and boilers which pumped water from the well below the building into the New River. The museum has an impressive collection of old vehicles including motorbikes, vintage delivery vans, classic cars, fire engines and a model railway. It’s open every Tuesday and the last Sunday of every month and entry is just £4 for adults, kids go free.

Best claim to fame: Enfield Town Barclays Bank boasts the world’s first cashpoint. The very first person to use it was Reg Varney of “On the Buses” fame. You too can withdraw cash here and admire the old market place next door, Enfield Grammar School’s Tudor Hall and the interesting and historic St Andrew’s church while you’re there. 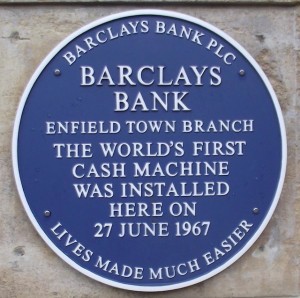 Best theatre: Chickenshed Theatre is an inclusive theatre company that was founded in a disused chicken shed in Southgate. Everyone is welcome at Chickenshed, and this is reflected in the range of stuff they create and put on, from children’s theatre, to original new drama, to panto, to jazz and comedy in the bar. Plus they do stacks of brilliant workshops and community outreach work. Top!

Best park: Grovelands Park, between Winchmore Hill and Southgate was formerly a private estate. The house is now a Priory Clinic and the grounds a public park. There’s summer pitch and putt, football pitches, children’s playground and huge grassed areas but we especially like the wooded areas, ponds and wildfowl. There are some good photos on the Friends of Grovelands Park website.

Leave by the correct exit and you can enjoy a pint at The Woodman. It’s a proper old school country cottage pub with a decent outside area. It nearly made best pub in this list but we’ve not been back there for ages so can’t thoroughly vouch for it. Do let us know if you’ve tried it recently.

Oh, and if you like parks you probably like gardens, so check out Capel Manor’s 60+ gardens and landscapes.

Best pub: Happening upon The Crown and Horseshoeson a fine day, is a wonderful thing. Sited on the New River in Enfield Town’s quiet back streets this is a Greene King pub with good food, friendly service and a massive waterside beer garden. You won’t feel like you’re in London here. In fact, you won’t even feel like you’re in Enfield. Don’t tell too many people about this one. 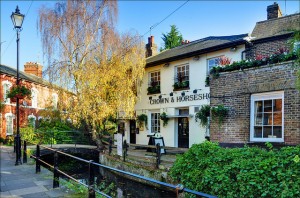 Most infamous shop: Quite why Edmonton Ikea — sorry, Ikea Tottenham (in Edmonton) — decided to stage its grand opening at midnight on Thursday 10 February 2005 eludes us. Seriously underestimating how popular it would prove in a deprived area it managed to keep its doors open for just 30 minutes before having to shut as people were hurt in the unseemly stampede to bag those bargains. Badly thought out opening aside, this is an Ikea you can get to pretty easily on public transport, and therefore is good.

Best sculpture: Outside St John’s Palmers Green is a sculpture of Christ supporting a wounded soldier. You could easily not notice but it’s beautifully done and aptly moving. It’s the work of Exeter born sculptor John Angel — who studied at Lambeth and the Royal Academy. He also created the Exeter War Memorial. Incidentally, he’s much more famous in America, where he emigrated in the 1920s. 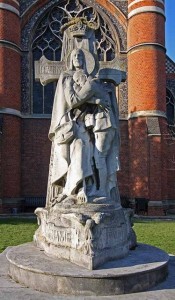 Best industrial heritage: Enfield gave its name to the world of small arms thanks to the Royal Small Arms Factory which was built at Enfield Lock in 1816. The Lee-Enfield .303 rifle was standard issue for the British Army until 1957. The factory closed in 1988 and redeveloped as Enfield Island Village but there is still a small museum beneath the clock tower which houses heritage information and three display cabinets.

Most mysterious moat: Trent Country Park by Oakwood Tube is less of a park and more of a massive green space, covering 413 acres and incorporating the wooded remnants of Enfield Chase, former royal hunting ground. It’s in this bit you’ll find the medieval Camlet Moat. Nobody really knows why it was built but everyone likes to moot that it’s haunted by the ghost of Geoffrey De Mandeville, Earl of Sussex and Hertfordshire and Constable of the Tower of London.

Historic house lovers, listen up: Middlesex University has recently left Trent Park and Trent Park House has been running open days and tours of the mansion.

And since we don’t have room for a ‘best historic house’ in this top 10, note that Forty Hall has just reopened after a major restoration.

Agree, disagree? Can you recommend eats in the borough? Discuss the best bits about Enfield in the comments

I'd add the crazy golf in Broomfield Park, one of the few crazy golf experiences you can enjoy without a trip to the coast.

In Best Theatre category I'd agree with Chicken Shed - for all the reasons you state - but Palmers Green's Intimate Theatre must be in with a shout - not least because David Bowie appeared there in 1968 in an improv mime performace directed by Lindsay Kemp - you can't get much more "Psychadelic 60s" than that! The event is detailed in a blog post on the Palmers Green Jewel in the North Blog)

Thanks for the note about the sculpture at St Johns - I've always passed by without giving it a second glance - I'll check it out properly next time.

Sadly at the moment, even if you do choose the right gate to leave Grovelands Park, you won't be able to drink at the Woodman. The brewery decided quite suddenly to close the pub last week. A local newspaper article details a community campaign to keep it open - but it looks like a major investment is needed to secure its future.

Oh noes re the Woodman! What a shame.

I have never heard of the Intimate Theatre before today! Thanks for the tip. And yes, crazy golf! I completely forgot about that. In fact, I must go and have a game.

The Woodman is open again! We were there a couple of weekends ago and it's lovely again!

Yes the Woodman is back! Coincidently I was there last night - They have a very good Open Mic acoustic music session on a Monday evening.