Bounds Green and the Blitz

Early autumn, marks the anniversary of the start of Nazi bombings of London during the the Second World War. The London Blitz began on September 7th 1940 and continued until the following April.

Tube stations across the capital were being used as makeshift bomb shelters - as this remarkable image reveals (right) taken on October 11th 1940.

People sheltering from air-raid slept on the stairs between the escalators at Bounds Green tube station as well as on the platform itself. 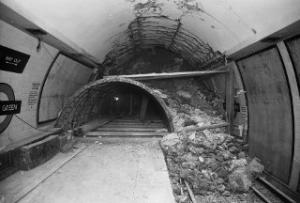 But just two days after this photograph was taken in a bombing incident on October 13th 1940, Bounds Green Station was severely damaged when a German aircraft bombed two houses on the Alexandra Park side of Bounds Green Road causing the tunnel to collapse into the station below.

The platforms were being used as an air raid shelter when the bomb struck resulting in many deaths and injuries.

Images from London Transport Museum and via Enfield Independent A plaque on the station platform marks the "Sixteen Belgian refugees and... three British citizens who died" in the attack. However the details of the nationalities of the killed and injured recorded in this memorial have been questioned in online articles.

The Bounds Green tragedy along with other incidents on the London Transport system formed part of the "Under Attack" exhibition at London Transport Museum, which in addition to the London blitz records the devastating impact of bombings of Coventry and Dresden.

Across the country and particularly in London local people are researching how their own area was affected by the blitz there are maps of reported bombs falling on London and - this map draws on the London County Council records of Bomb damage and combines each incident with reminiscences of the events from those that witnessed the devastation.

Have any local historians further information about the effects of the blitz on our area?

"We had a bomb hit Bounds Green. And it's only a shallow tunnel, 25 feet deep. Of course, all the girders come down, and people were laying on the platform asleep."

I have just discovered a rather harrowing piece of personal testimony from London Underground worker Albert Honey who was involved in the rescue operations in the aftermath of the Bounds Green bombing. You can hear a recording here or read a transcriptof his story

Wow, thanks for reviving this blog post Richard and for the link to 20th century London. A sombre anniversary. I didn't know about this and I've not noticed the plaque on the station, must look out for it.

The plaque is towards the rear of the westbound platform.

Comment by Simon Honey on November 11, 2019 at 9:32
My Grandad is Albert Honey mentioned above. I have never heard his personal testimony, but do remember the stories he told me, specifically Bounds Green as it was so vivid for him throughout his life. The link sadly does not work anymore, and I would really like to know where to source the audio of him from. I have just contacted the London Transport Museum who had an exhibition called ‘Under Attack’ in which he featured, so hope to hear back from them. Thanks for accepting me in to this group... Lest We Forget