This week's Talkies Community Cinema screening celebrated 50 years since the release of the Beatles film "A Hard Day's Night".

A packed house enjoyed the film - and the live music by Geoff Simpson and his band. During the early 1960s Geoff (pictured on the left of this photograph) was guitarist and singer in The Sonnets who could regularly be seen performing as resident band at Muswell Hill's Athanaeum club.

My nephew once said to me that the Beatles were not the greatest band – whatever that means? But then he’s nine years younger than me, he’s only 61. And it is a generation thing.

All I know is The Beatles had a massive impact on me back in 1963.They meant nothing at The Majestic Finsbury Park April 1963 when the compere said (after we finished our set) "next week we have pop chart act The Beatles". To me they were a bunch of old fashioned northern rockers, and their record Love Me Do went right over my head.

Then came Please Please Me and more importantly the B side Ask Me Why. (You could always flip a Beatles single to find a gem on the other side.)

And that was it - in no time at all we had discarded our Binson echoes played ‘dry’ and began to grow our hair. 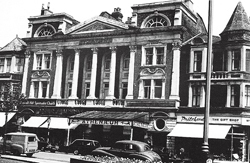 By 1963 my band The Sonnets had secured a residency at The Athenaeum Ballroom Muswell Hill, where the Sainsbury supermarket is now located. The Ath’ was an old Victorian Theatre that had seen better days.

Every Saturday night three bands would play there and we were the house band. Legend has it The Kinks and Rod Stewart also performed there - I don’t remember them, they were unknown at that time of course.

We were nowhere near the best band, but we were young and trendy and would perform the very latest tunes.

I used to work in the West End and on a Friday would buy the latest releases from the top record stores i.e. Imhoffs - now a Starbucks in New Oxford Street. I remember buying records, sticking them on my old record player which sat on the floor. Lying down with my ear to the speaker and writing down the words then trying to work out the chords with my guitar. The same way the Beatles would learn those American covers. No music and of course no internet.

Then later the whole band would turn up (girlfriends and all) and we’d learn them together. I remember my mum would moan about the drum stick marks on the chair arms.

One Friday we learned She Loves You this way, the weekend of its release. We performed it at the Ath that Saturday night and it went down a storm. We never played it so well again, even after eventually learning the right chords. A case of the right song at the right time.

The Athenaeum was demolished around 1966/67 amid much protest but it was a safety hazard. The bar was located up in the old circle and would get really crowded. Heaving with people while others danced below. Today Health and Safety would have kittens.

They did put bouncers on the stairs sometimes to prevent overcrowding, but people used to push through.