No longer a 'Work in Progress' A trio of Palmers Green authors were out on the street in Green Lanes last weekend selling signed copies of their comic novel, Work in Progress, hot off the press. Thanks to a massive crowdfunding effort by some 250 supporters, their dream of getting the book published is no longer a work in progress - and it's already attracting rave reviews.

Authors Dan Brotzel, Martin Jenkins and Alex Woolf originally wanted their farcical novel-in-emails to be called Kitten on a Fatberg, but publishers Unbound insisted on a less surreal title for this story of an eccentric writers group written by a group of..well, only slightly eccentric writers.

Work in Progress is available from all good bookshops or you can buy it as an ebook direct from the publishers. If you'd prefer it delivered, forget Amazon and buy it from uk.bookshop.org, the online bookseller that generates money for local bookshops - the total amount passed on so far is nearly £1.5 million. 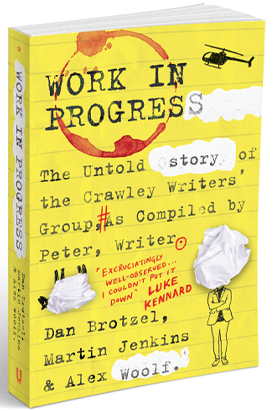 In Colorado mountain towns, where affordable housing is scarce, 'even living out of your car is gentrified' - Finger Lakes Times