Our Musical Heritage: Folk at the Springfield Tavern and the Starting Gate

"Writing about music is like dancing about architecture - it's a really stupid thing to want to do."
-- Elvis Costello, in an interview by Timothy White entitled "A Man out of Time Beats the Clock." Musician magazine No. 60 (October 1983), p. 52.

Our local area has a bit of hidden history as a location for the performance and recording of music stretching back over many years. We have written in earlier posts about jazz at the Fishmongers Arms and the local connections with blues and rock history – but there was also a lively local folk music scene.

Folk Music at The Springfield Tavern

The Springfield Tavern has recently undergone redevelopment – with an extension at the back and the former upstairs function room becoming new housing. So let’s look back at some of the musical activity that previously took place at the Springfield.

The upstairs room was home to  a long running Sunday evening folk club – a house band would play each week along with floor spots from club members followed by the main act.

Several  British performers who went on to become familiar folk names had an early outing at the Springfield;  John Martyn played here in November 1968; Steve Tilston performed as a guest in February 1972. Dick Gaughan, Pete Atkin and Al Stewart all appeared in the early 1970s There is also a story that David Bowie (whilst still knows as Davy Jones) turned up to perform a few floor spots and in an early incarnation with his band “The Humblebums” Billy Connolly appeared.

The evenings could get very busy as one club goer recalls:
"The first Time I saw Steeleye Span was at Springfield Tavern in Bounds Green in around 1969/70, it was upstairs and the room was full, the worrying thing was the floor moved as people jumped and swayed around and some of us thought we might end up in the Pub below"

Folk music performances continued throughout the 1970s, club nights or “singers nights” cost members 40p and guests 60p for entrance however prices were increased for nights with featured performers For example in March 1978 when John Renbourn and Davey Graham were appearing members could get in for £1 whilst guests had to pay £1.25p for the evenings entertainment. 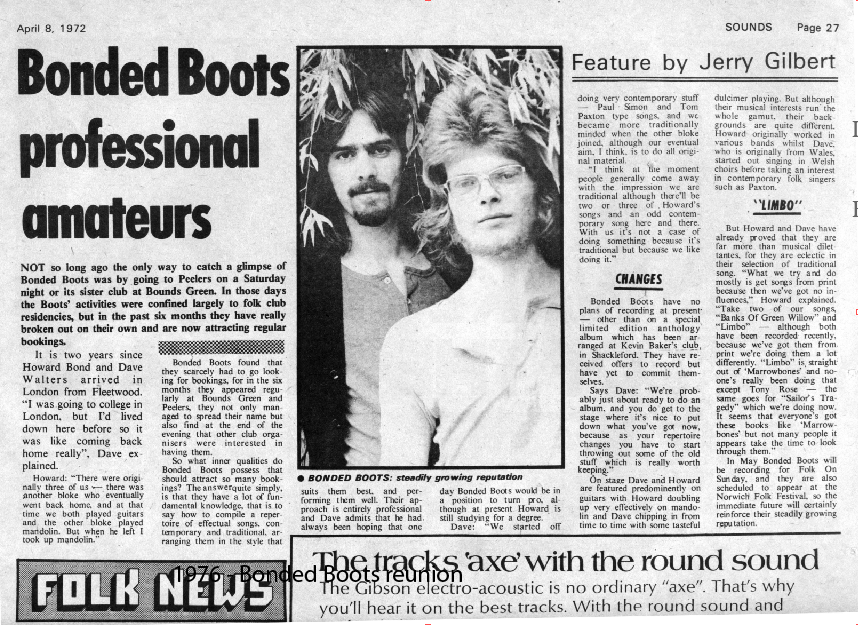 Ralph McTell was a resident performer for a while and for many years the resident band was North West Folk duo Bonded Boots: Dave Walters and Howard Bond. Click on the image -right- to read an article from a 1972 edition of Sounds which references the Bounds Green club.

Occasionally the Springfield would host famous American acts who were touring the UK; legendary performer Tom Paxton played here; (reputedly doing two 30 minutes spots with no encore) Bizarrely a recording of a night at the Bounds Green folk club has found it way to the archives of the University of Mississippi.

Perhaps the American connections are what prompted the club to hold a Bob Dylan lookalike contest. As one former regular recalls “…you have never seen so many flat caps and Gibson guitars in your life. Mind you they may have looked like Dylan but all resemblance ended there!” 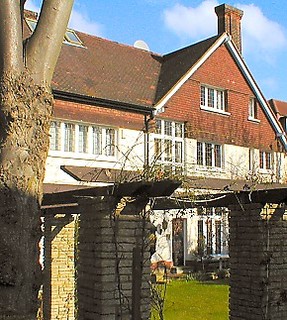 Many of the legends of British folk were from the areas round about north London. New Southgate resident  Ashley Hutchings met guitarist Simon Nicol in north London in 1966 when they both played in the Ethnic Shuffle Orchestra. They rehearsed on the floor above Nicol's father's medical practice in a house called "Fairport" on the corner of Fortismere Road and Fortis Green in Muswell Hill, pictured right. Famously this neighbourhood was also home to the Davies brothers of Kinks fame. The house and its central role as a musicians meeting point lent its name to the group they formed together in 1967: Fairport Convention.

Female Vocalist  Judy Dyble soon joined the band as singer and electric harpist adding to the band's distinctive sound - she was living locally and had attended St Michael's Primary in Wood Green and Minchenden Grammar Southgate.

Folk Music at the Starting Gate

As well as the Springfield there was folk music upstairs at the Starting Gate opposite Alexandra Park Station (the pub was originally named after its location at the start of the former Alexandra Palace horse racing course – but is now known simply as The Gate) As with the Springfield many of folk music's great names performed here - including Bert Jansch and John Renbourne who each played solo gigs before going on to form Pentangle.

Just as with the Springfield Tavern some acts generated a very large audience. A story is told of the night Bert Jansch first played the Starting Gate - his first album having just been released he increased his performance fee to £45 - around a months average income in those days. Club operators arrived to open up and found a queue around the block and heading up to Ally Pally. A swift bit of negotiation with the landlord meant that the usual limit for attendance in the upstairs room was tripled ... on the basis of anticipated beer sales ... and 150 people trooped upstairs overflowing the biscuit tin they used as till with the takings - and fully justifying the increased fee.

Through the late seventies and the post-punk years of the eighties live folk music began to fall out of favour - however a core specialist audience still exists. In a new venture started earlier this year we now have our very own Bowes Park Folk Club - meeting at Mum's Bistro on the first Thursday of each month.

And you don't have to travel far to see some stalwarts from the earlier period still continuing the Folk Tradition - a short 34 bus ride along the North Circular to Walthamstow on a Sunday evening will take you to the Walthamstow Folk Club the current incarnation of a long-running institution - with some very high quality performers.

Many other types of music are played in the pubs and bars across north London - and frequently a folk tune will be re-interpreted or a song performed in a folk style - the folk tradition is still alive!

Were you a regular on the local Folk Scene - do you have any stories or reminicences to share - please get in touch. The next in our irregular series of musical history blog posts will focus on the recording studios in our area.

Read more of our local musical heritge in our articles about jazz at the Fishmongers Arms and the local connections with blues and rock history.

Fascinating stuff, thanks Richard.  It would be interesting to hear more reminiscences from music lovers lived in Bounds Green in the 60s and 70s.  I confess I read 'flat caps' (ref the Bob Dylan lookalike contest) as 'cat flaps' - but then I've had those on the brain lately.  That's another discussion entirely..

The Starting Gate gets a mention or two in my Autobiography as well as stories of Wood Green, Bounds Green and Muswell Hill and all things North Londonish (plug plug plug!)

Hope you don't mind me putting this link I will remove it if it's frowned on :-)

Started by John Moratiel in Items offered - for sale or for free. 23 hours ago. 0 Replies 0 Likes

Started by Colin Marr in Local History. Last reply by John Moratiel 23 hours ago. 1 Reply 1 Like

Started by Caroline Simpson in Community News and Information on Wednesday. 0 Replies 1 Like