The recent press coverage of the death of Richard Attenborough includes a couple of references to Palmers Green. At the age of 17 Richard Attenborough won a scholarship to the Royal Academy of Dramatic Art in London, and while studying there in 1941 he made his professional stage debut at the Intimate Theatre, Palmers Green, playing the lovesick teenager Richard in Eugene O’ Neill’s Ah, Wilderness.

His performance was well received, with enthusiastic applause and a curtain call. The local newspaper, The Palmers Green and Southgate Gazette singled him out in their review from the edition dated October 3rd 1941.

The Intimate Theatre is fortunate in its young actors and actresses, a well-trained set of  people who are gaining valuable experience in the company of several first-rate exponents of the theatrical art and under a producer who is competent and painstaking. Richard is played by Richard Attenborough, whom the audience took to their hearts at once. With good reason for he contributed a crystal clear sound performance.

He returned to Palmers Green at the end of 1941 for a performance of Goodbye Mr Chips and the following week a run in a play called Cottage to Let. It was to be his last performance at the Intimate Theatre as the following year, 1942, he began a successful cinema career. Initially he was given his first screen role, as a submarine stoker, who deserts his post in Noël Coward’s stirring tribute to the Navy, In Which We Serve (1942).

Coincidentally Richard Attenborough's widow, Sheila Sim also appeared several times at the Intimate Theatre during the early 1940s - almost a decade before they met each other during the opening Run of The Mousetrap - a play which is still performed to this day.

Below is the Playbill from Richard Attenborough's first professional engagement at Palmers Green's Intimate Theatre. 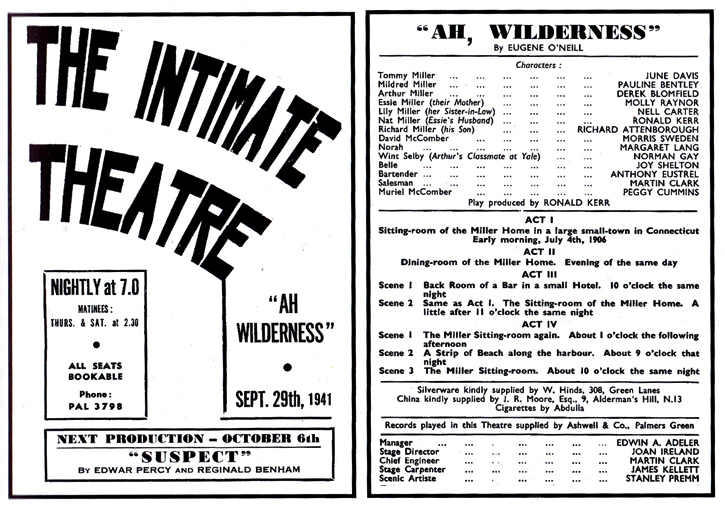