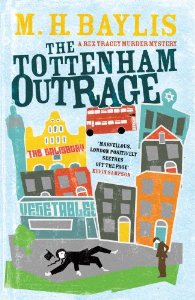 Troubled local news reporter Rex Tracey is back and untangling more mysteries in Haringey, this time arising out of the sudden death of an entire family of Hasidic Jews enjoying a picnic in Finsbury Park.

He might have kept to the reporting had his mate and photographer colleague, Terry, not been been charged with the murder of next door neighbour, the annoying Dr Kovacs, shortly afterwards - Kovacs having uncovered new information related to the 100 year old robbery and double murder nicknamed The Tottenham Outrage.

Determined to get Terry off the hook, Rex goes sleuthing, delving into Hasidic life and culture in Stamford Hill, visiting a Travelodge off the North Circular, attending an extraordinary gathering in 'cloud namer' Luke Howard's crumbling house, getting unwisely drunk at the Salisbury, taking the 341 to Hatton Garden, looking for terrorists on Wood Green High Road, popping into North Middlesex Hospital, Wood Green Crown Court, Tottenham nick and having a brush with death on the Angel Road roundabout.

Along the way, Baylis retells an infamous old story and gives it a new twist through a fascinating cast of characters. But as in A Death at the Palace, locals will get immense pleasure out of the supporting cast and setting - the people and places of Haringey.

Excellent news!  I loved Death at the Palace.  Thanks for the tip!