While sharing a photo of Tottenham Pudding on Twitter recently, a couple of local tweeters mentioned Tottenham Cake to me. It turns out this cake is nothing to do with Chris Morris or something that you give young Spurs fans on their birthdays.

If you, like me, have never heard of it, it is described in this way by Ted Willis (creator of Dixon of Dock Green, born in Tottenham in 1918) in his autobiography,

a scone like base covered with lurid pink icing. It was baked in long flat trays, then cut into cubes, which retailed for a penny each. Luckily the cake was not always cut evenly or the icing uniformly spread, and the smaller defective pieces were sold off at half price.

There is some disagreement with Ted's view that it was 'scone like'. It's generally agreed to be a sponge.

Today you can buy it in Greggs the Baker but it has its origins in Tottenham's Quaker community and as Lord Willis goes on to explain,

The original baker was Henry Chalkley who was a Friend. The tradition of a Tottenham cake is continued today at Tottenham Friends Meetings. Now baked by Peter Brown, the pink icing is usually achieved by using mulberries off the tree in the burial ground.

If you fancy having a go yourself (with mulberries or pink food colouring is up to you),
Netmums member Olga suggests the recipe reproduced below to produce a sponge cake.

Any Friends out there who would like to share the secret or maybe we have people old enough to remember it pre-Greggs (although maybe not all the way back to 1901!) who can settle the scone/sponge mystery.
Tottenham Cake
For a basic traybake you need a 12 x 9 inch traybake or roasting tin, greased and base lined with baking parchment.

Measure all the ingredients into a large bowl and beat until well mixed. Don't overbeat or the mixture won't rise. Pour into the prepared tin and bake at 180 deg (fan 160 deg) or gas mark 4 for 35 - 40 minutes. Cool in the tin then turn out.

Mix together to give a runny consistency and spread over the cake. When set cut into squares.

Here is my effort. Anyone else fancy having a go or are there regular Tottenham Cake bakers on the site already? 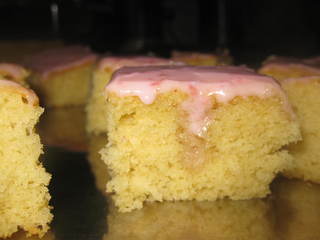 Comment by Ruth Cherrington on December 3, 2010 at 16:27
Looks yummy to me. If anyone tries it out and has left overs, I'm a willing volunteer to finish it up! On another point, I like the way Greggs attempt to do 'local' stuff. Recently when in Sheffield, I saw they sold there a delicacy from Sheffield that I had never heard of before.

Comment by Liz Ixer on December 3, 2010 at 16:37
Thanks Ruth
It also tastes great with lashings of custard (and an accidental top tip comes from my husband who insisted on heating it to serve, melted the topping and created treacle sponge cake).
The kids of 2010 share the tastes of the kids of 1901. I made some for a school event and it disappeared very quickly!

I think Tottenham cake is as far as it goes for 'local dishes' at least from what I've found...unless someone can put me right on that.

Started by Pat in Items offered - for sale or for free. on Sunday. 0 Replies 0 Likes

Started by Daniel Cowan in Community News and Information on Friday. 0 Replies 0 Likes