The war memorial at St John the Evangelist church in Palmers Green had an overhaul and clean-up in time for 2013's Remembrance Week. The Palmers Green war memorial is a very fine piece of work. Carved from coarse limestone it stands around 12 feet high on a wide stepped base.  The statue dominates the front of the church at the corner of Green Lanes and Bourne Hill. It was erected in 1920, just two years after the end of the Great War, designed by Sir Frank Salisbury and sculpted by John Angel.

Designer Sir Frank Salisbury was an artist born in Hertfordshire in 1874. From humble beginnings he won a scholarship to the Royal Academy schools  and went on to become known as “Britain’s Painter Laureate”. His forte was large scale ceremonial and historical work - but was also a stained glass artist and designer. Despite his personal pacifism his best known work was his depiction of war and military life. 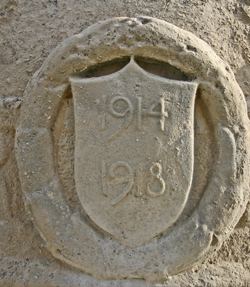 Salisbury's designs for the St John's memorial were interpreted and sculpted by John Angel - this statue was one of the earlier works of Angel,  a sculptor who went on to have a worldwide reputation. John Angel also designed the Exeter and Bridgwater War Memorials before leaving the UK in 1925 to live and work in America.

His numerous commissions include: most of the statuary for the Cathedral of St John the Divine, New York; the Altar of St Patrick's Cathedral, New York as well as statue of The Annunciation  at Princeton University chapel and several other ecclesiastical sculptures.

The Palmers Green war memorial  shows Christ embracing a wounded soldier, who is depicted bootless with a bandaged head. The figures, both carved larger than life-sized, stand in front of an enormous cross the reverse of which includes the "roll of honour" - the list on names of men of the parish who had been killed in action.

After almost 100 years of standing in the rain, weather, air-pollution and London smog the PCC, with a grant from the War Memorials Trust has undertaken a clean-up and restoration of this distinctive local landmark.

It's a magnificent memorial. Wonderful that they've cleaned it up.

Beautiful and moving.  Good to see an 'ordinary' soldier being depicted.  Thanks for this information.