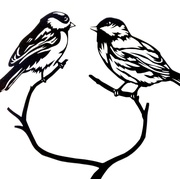 The Step Gallery’s next exhibition features beautiful illustrations by Dan Parkinson, a new resident in the area.

Join us at the exhibition launch party on Thursday 21st February, 7pm – just come along, take a gander at the work and have a chat with the artist.

Our delicious house wine is only £3 a glass or £12 a bottle throughout the night!

Dan has been inspired by recent exhibitions at The Step of local landmarks, which encouraged him to look more closely at his borough.

“I wanted to build on the local theme that has proven so successful for the gallery, but also look at some of the less permanent features of the area… the wildlife that passes through. I’ve always enjoyed drawing birds and animals, and find that the strong graphic lines and shapes of bird are often really enhanced by the bold contrast of black and white, whether pen and ink or papercut.”

Dan often works from photos, but usually tries to capture his image directly in the final medium without rough sketching or outlining;

“I find that sometimes, when roughing an illustration out, I can almost loose the energy of the pose or the character; in trying to get it just right, it can almost get over-drawn. By forcing myself to commit to the paper with permanent marks, it often makes it easier for me to capture its fluidity, to capture a more natural pose.”

Started by Collage Artspaces in Community News and Information 19 hours ago. 0 Replies 0 Likes

Started by Lisa Jones in Community News and Information 23 hours ago. 0 Replies 0 Likes

Started by Anna Maudar in Items offered - for sale or for free.. Last reply by Amanda Terroni yesterday. 2 Replies 0 Likes

Started by Daniel Cowan in Housing Accomodation and Flatshares yesterday. 0 Replies 1 Like