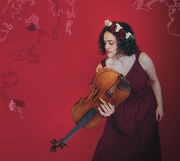 Ela Kalicka is a solo artist who explores the dynamics behind her two instruments - the voice and the viola, creating unique musical arrangements with captivating motif work and graceful melody lines. She draws her influences from the richness of Polish folklore and world music sounds as well as the storytelling of songwriters like Regina Spector and Joni Mitchell. Ela’s music is characterised by a bright, uplifting spirit and an interplay between sacrum and profanum, softness and energy.

‘Beautiful & Sweet’ is Ela Kalicka’s debut album. It blends a variety of genres including pop, folk, world music and jazz, mirroring the dynamism of the world that surrounds her. The songs written in English and Polish - the artist’s mother tongue, weave together the themes of love, identity, belonging and growth, encouraging the listener to step in and join the exploration.

FirstFruits are a London based Folk/Rock band consisting of members Daniel Turner and Nikki Marco. Since meeting in 2017, the two have collaborated on a variety of recordings and live events. The band officially formed in 2018 and released their debut EP, Psalms, Songs & Sorrows in February 2021.

The premises has a fresh air ventilation system installed throughout the restaurant and theatre.