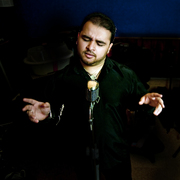 Shahid Khan is a born and bred Londoner, he comes from a family of renowned tabla players and classical singers from the Patiala Gharana based in Pakistan. He started singing from the age of three and from the age of ten started receiving singing lessons from Pandit Vishwa Prakash and Rauf Mehndi. Shahid's Guru from the age of 16 was and remains Ustad Hussain Baksh Gulu.

Shahid's biggest influence has been Nusrat Fateh Ali Khan. Shahid has recently completed a successful run as the Heritage Singer in Bend It Like Beckham – The Musical at the Phoenix Theatre in London’s West End. The show was nominated for five Olivier Awards and won the Critics's Circle Theatre Award for Best Musical, topped Time Out’s Best West End Musical poll and won the Curtain Up Best Cast Recording Album of 2015.

Shahid will be performing Sufi and other popular songs in a live and unplugged event.

Accompanying on keyboard will be Kaykay Chauhan and Amardeep Sarl on tabla.