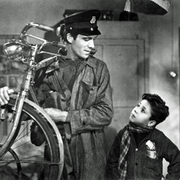 The yearly membership is £25.  However, ticket for viewing the film as our guest is £4.00

Skin Deep is a film about the internal struggle of Rashid, a mixed-race teenager trying to rise to prominence.
Like Rashid, Ali Khan himself is mixed-race and grew up on an all-white housing estate, at a time when the National Front was at its most powerful.
Skin Deep examines how Rashid attempts to hide his Asian side to fit in with his contemporaries, going as far as joining a violent gang of racists.

Feature Film:  The Bicycle Thief
Director: Vittorio De Sica
Date: 1948
Duration 93 Minutes
It is the most powerful, masterpiece of a movie ever made and is an Academy Award winner for being an outstanding film of the year).  (subtitled in English).

Started by Anna Maudar in Community News and Information on Wednesday. 0 Replies 0 Likes