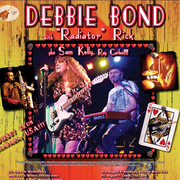 This Friday we're delighted to have on a return visit, direct from Alabama, USA, Debbie Bond performing at St Harmonica's as part of her 2015 UK tour.

30 years in the music business, cutting her teeth with the likes of Johnny Shines, Eddie Kirkland and Willie King, Debbie's voice has been compared with Bonnie Raitt and Maria Muldaur. Expect a mix of rocking covers as well as searing originals from Debbie and her  fantastic band that inclues 'Radiator' Rick Asherson on keys, Ray Carless on sax, and the amazing Sam Kelly on drums. Her latest album, 'That Thing Called Love' will also be available on the night. Check out Debbie on her website www.debbiebond.com

Half time support comes in the form of Sky Wood and Jesse Thomas, frontman and guitarist from  the Blues Chapter performing their acoustic duo set as 'Two Man Job'.

Can our luck hold this Sunday? We've had great weather for the first three in the Broomfield Blues series on the bandstand at Broomfield Park and this Sunday is a real treat. Paul Malloy brings his double bass and a stellar line up the Hot Club De Broomfield  to play you Gypsy Jazz of the highest order on their Maccaferri instruments starting at 2.30pm. Along with Paul the band consists Dave Ahmed, Richard Bawcombe and the amazing young Harry Diplock on guitars and the fantastic Maurizio Minardi on accordion. Harry is only 21 and has just finished a degree in guitar-making and will be playing one of his own creations on the day. Maurizio is classically trained and a real virtuoso.

At 3.30pm you are in for another treat! Just about the best acoustic Blues duo in the country, Paul Lamb and Chad Strentz take to the bandstand to bring you their stunning acoustic set. Paul Lamb was last years British Harmonica player of the year and he and Chad are as entertaining as they are accomplished. Just back from a big festival in Germany where he played to thousands Paul has managed to fit us in before going up to the Colne Rhythm and Blues Festival over the bank holiday.

And if that wasn't enough, the Hot Club De Broomfield will be back at 4.45 to play us out for the afternoon....wow!

See you there, too.