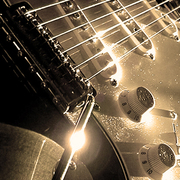 A well respected music journalist was overheard leaving the Blues Stage at 'Livestock' on Saturday saying that he had just watched the best Blues band he'd ever seen in his life. He was referring to The Customtones, and he may well be right. They were a smash hit on the Bandstand at Broomfield Park at the beginning of August and equally acclaimed at Livestock last Saturday.

Martin Fieber builds his own guitars under the Customtone label and he gets a unique sound from them. Variously dubbed as 'The Sultan of Slide' and 'Britain's best kept slide secret', Martin is a virtuoso player and great frontman for his band of accomplished musicians. Mick Parker on drums, Steve Taylor on keyboards and Terry Duggan on bass; their collective musicianship is hard to surpass. Don't miss them, one of the best bands around.

Support is in the form of Mad Dog Dave Barnes. An extra dose of superb slide guitar-playing.

Started by Pat in Items offered - for sale or for free. on Sunday. 0 Replies 0 Likes