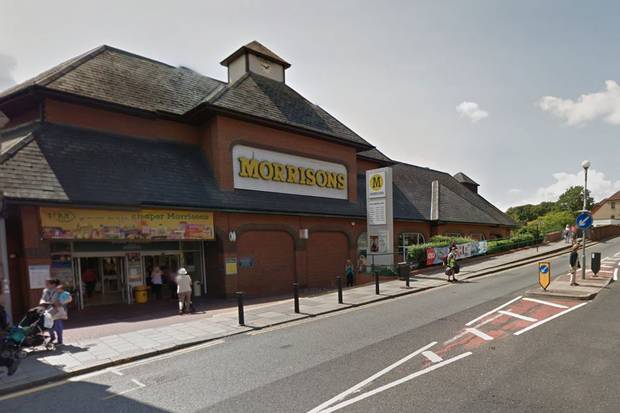 Evening Standard story:An elderly woman who uses a walking stick was thrown to the ground and robbed by two "youths" in north London [Friday] afternoon.[13th]

Scotland Yard said it was mounting an appeal following the incident near Devonshire Road in [Palmers Green] shortly after 1pm.

The attack immediately left the 82-year-old woman, who had been shopping at a Morrisons supermarket, in a critical condition in hospital. Police today said she was now in a stable condition.

Detective Constable Ryan Clark, who is leading the investigation, said: "This was a callous attack on a vulnerable member of the community who was out in the middle of the day shopping for groceries.

"There would have been a lot of people in the area at the time. My team is keen to hear from anyone who saw anyone suspicious and in particular two youths making off from the scene of the attack."

A Scotland Yard spokeswoman said: "The elderly woman, who was walking with the aid of walking stick, was set upon by two youths as she left Wm Morrison's supermarket shortly after 1pm on Friday, 13 March.

"The woman was rushed to central London hospital in a critical condition by London Air Ambulance after being knocked to the ground. Her condition is now stable."

No arrests have been made and enquiries are ongoing.

Palmers Green and surrounding areas would have been busy with pre Mothers Day shoppers, so has anyone got any camera phone images please that may have captured youths following the elderly lady or running off later?

Why is there no description of these two "youths". The police are making a habit of not giving proper descriptions of the kind of scum that always commit these kind of attacks. Political correctness shouldn't come into it when two potential killers are still out there putting the public at risk.

Permalink Reply by Doyougetme on March 15, 2015 at 10:46
Michael, I think it's clear to all readers, based on your comments, where your own suppositions, assumptions and prejudices lie in this crime...

Let's let the police do their job and hope that better descriptions are forthcoming...

B******t. Every news report on this attack describes the suspects as simply two "youths". Do you think holding back on a full description because it might offend certain people is the correct thing to do? Turning away, shutting up and leaving things to the police is not good enough. I haven't a clue as to the ethnicity of the old woman and frankly I don't care - she's a human being and I'm disturbed by crimes like this happening on my doorstep. YOU, Doyougetme, are the prejudiced one in your obvious assumption that I am a white Englishman - which it just so happens I am not. All I am saying is political correctness shouldn't come into such a serious thing as finding potential murderers that are still loose on our local streets. I want these people caught, simple as.

Michael, I agree with you 100% and when a crime has been committed as much information regarding any description should be given out to the public ASAP, hoping it will jar someones

memory and catch these "youths" who hang around the streets looking for vulnerable people to rob and injure, they don't deserve being protected by Police, and when found

(hopefully) !!  should be locked up and the key thrown away regardless of who they are.

Thankyou Sheila. The dreamer Doyougetme seemed to think that nobody out there would agree with me at all! What planet are people like that living on? My sympathies are with the 93-year-old woman who was attacked on the street - I will not show any respect in words or otherwise to the kind of "youths" who time and time again commit these kind of attacks i.e scum.

Well,here's someone that does agree with you.What Doyougetme is saying,is that,if a certain race attacks someone or commits a crime then,people are supposed to guess the ethnicity of that criminal and his or her description should not be made public.How downright idiotic.No wonder people are afraid to come forward with information when people like him are spouting their rubbish.

The Police have issued a request for information via their Twitter account and have requested that any witnesses contact them  by reporting information on 101 or to Crimestoppers on 0800-555-111 quoting reference CRIS 5205449/15.

If you were there and you saw something you should report it. The important point is they want to hear from witnesses at the scene to assist in apprehending and prosecuting the miscreants,

The views, assumptions or prejudices of anyone not present are irrelevant to the case and not helpful to the investigation.

My free speech, thoughts, opinions etc. are not hindering any investigation. I'll say what I want. And right now, I want the full description of these "youths" revealed. Now that's something that would help the investigation.

Why have the Police requested information via their Twitter A/C ???  not everyone has a computer,

laptop or other pieces of equipment to view and add information onto it.  What happened to the old fashioned bright yellow board with all the details of the crime with day, date and Phone numbers

to contact police direct with any information with the hope to catch these "youths, Yobs & Scum"

who prey on elderly people who can not protect themselves. they need to be caught ASAP before they do an injury to another vulnerable person.

Crimes like this tend to happen, go unsolved, then get forgotten about. A little message on Twitter isn't enough. This crime should be forced into everybody's faces to jog memories of that day so the scum can be caught. Already, two people on this forum have basically told me to be quiet and go away. Which is such a British thing to do. Say nothing, don't get involved, don't think about such a horrible thing as an old woman being thrown to the floor and robbed in case it ruins your day. And as for presumptions and prejudices etc. why should I not presume that it's the usual suspects to blame? Statistically in London, violent muggers are most likely to belong to one age group, one ethnic grouping, probably have affiliations with a street gang or have a previous history for knife carrying/violent crime. This is no ignorant fancy of mine, it is a STATISTICAL FACT. Albeit one that tends to send certain people into a tantrum. The fact that in a multicultural city most muggings are committed by ONE ethnic grouping is outrageous, and by never mentioning this uncomfortable fact (i.e 'keeping your prejudiced opinions to yourself') nothing will ever be done to address this problem. I'm outraged and disturbed by this crime which virtually happened on my doorstep. So forgive me for offending any sensibilities in opening my mouth and wanting these pieces of scum caught.

Permalink Reply by Mat Riches on March 17, 2015 at 8:38
i think it is because they are appealing for witnesses and not asking if anybody knows who committed this appalling crime. Could be wrong but I think that is how the procedure works, if enough witnesses come forward and when they have a clear picture of the criminals then they will release a full and proper description.

Really hope they are caught and, more importantly, the lady makes a full recovery.