Food for the Gods? 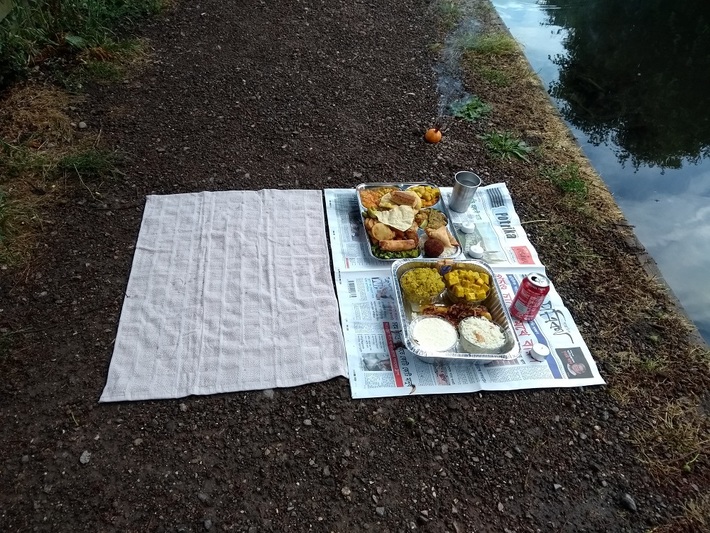 At about 7.45 on Saturday I was walking along the New River Path from Palmers Green.  I went over the North Circular, and then through the Green Space at the end of Russell Road.  A few yards along the next stretch of Path there was a large Indian meal for 2 laid out very neatly on an open sheet of newspaper in some Hindi language that was a few inches from the edge of the river.  Along with the two trays and bowls of food there was a can of coke on the right, and a steel goblet of water on the left.  There were three night light candles - one of which still had a flame - and on the far left, off the paper, was a bundle of incense sticks burning in a satsuma.  Next to the sheet of paper there was a clean tea towel laid between the meal and the fence as if someone could sit and eat... yet there was not really room to sit and eat.

There was no-one further along the Path, and no-one back towards the road.  I waited a few minutes to see if anyone would come back.  But no-one came.  If two people wished to eat a meal near there- there is a long bench and many good logs and stones in the Green Space to use to sit on and eat. I waited and thought, and then carried on walking home trying to work it out.

I decided that it must have been an offering of a meal for the Gods of the New River.  Many people have said that the New River has been 'a godsend' during these strange times - somewhere to go and chat to a pal, have a beer, or just sit and watch nature at its best surrounded by a lovely collection of wild flowers.  I think that this was someone who had watched the young cormorants fishing near there, and the two fluffy baby goslings and their parents, the many ducks and sometimes the kingfisher, the shoals of fish and the scrambling crawfish...… and he or she believed that it would be right to offer something to the New River in return.

I went back on Sunday morning to see what was or was not there.  At 10.30 there were many dog-walkers, and others out for their morning constitutional; the Path was well used.  There are dozens of foxes in that area, and crows and seagulls.  The food was untouched.  The offering had been left alone, and only the steel goblet was missing.

I spent a good while cleaning up the rubbish near the two bins there, and wondering what to  do about the meal lying on the Path.  In the end I decided that the gesture had been made, nature had recognised it overnight... but I felt that a busy Sunday would make a mess of it and the Path and so I binned the food and paper and candles and satsuma.  I cleaned the tray and what turned out to be four lovely cut-glass bowls as well as I could and left them there by the fence for the owner to collect - I hope she or he will.

I would be fascinated to know if anyone else has come across something like this in our area.  And do let me know if I have totally misinterpreted the presentation and tell me the alternative story.  Continue to enjoy the New River and help to keep the Path clean and tidy.

Just a quickie... I gather from someone who knows about Hindu customs and religion that it would have been an offering to the water.  Water has healing and cleansing powers, and it was to the water of the New River and not to any particular New River god that the meal would have been left.

Started by Anna Jenkins in Community News and Information on Monday. 0 Replies 0 Likes

New River to be closed from 17 July until early October

Started by Daniel Cowan in Community News and Information on Saturday. 0 Replies 0 Likes

Events are back at Platform 1 by Leafy Bean Co