New River Path near Myddleton Rd - What to do?

The New River is one of the loveliest things in our area, and to sit along its bank with a picnic or just contemplating is a great and simple pleasure.  BUT.... and it is a BIG BUT, we do have a problem, or rather a few problems with the area near the entrance to the Path in Myddleton Road.

For many years I took on a totally voluntary and self-motivated role of rubbish clearer at the top end where the river goes under the bridge and into its tunnel, and along to the Whittington crossing. Early last year it seemed a good idea to get Thames Water to install a bin at the top, and that took many months of negotiating.  The job got more and more time-consuming and a pain (for back and brain) and Emma K kindly organised a rota.  That rota of volunteers has been running since the late autumn and they tidy up the Community Garden, The Gym and the New River Path twice a week.  Thank you to all.

On the whole this has worked very well, and we have all kept the rubbish under control, but in the last few weeks things have got bad.  See the attached photo for what it looked like on Monday am.  It took 2 hours to clean - 7 bags of recycling and 3 of general waste.

The drinkers drink more, so more cans and bottles. At times there is lots of drug taking and drug dealing. Some members of the groups get angry and aggressive and there have been fights - with knives and even a sledge hammer!  People defecate along the entrance area and at the top and other places.  People have started to have barbecues and leave the metal waste behind.  If only people would take their cans and rubbish away and put them in the street bins - after all they bring them in a bag so that would not be a problem.

People who live in Marlborough Rd and back on to the River do not want to use their gardens when there is noise, heavy drinking and various other anti-social behaviour just feet away.  People do not like to bring their kids out to play and enjoy the River Path.  And the volunteers are finding it impossible to keep up with the mess.

The Path belongs to Thames Water, not the Council.  TW do not provide a waste collection service, and neither does the council on this land.  The local Police try to keep an eye out for drug dealing and ASB, but they cannot be on watch 24/7.

A few of us feel it would be good to have a wider discussion on this, so do chip in with your ideas as to how this could be managed and improved. 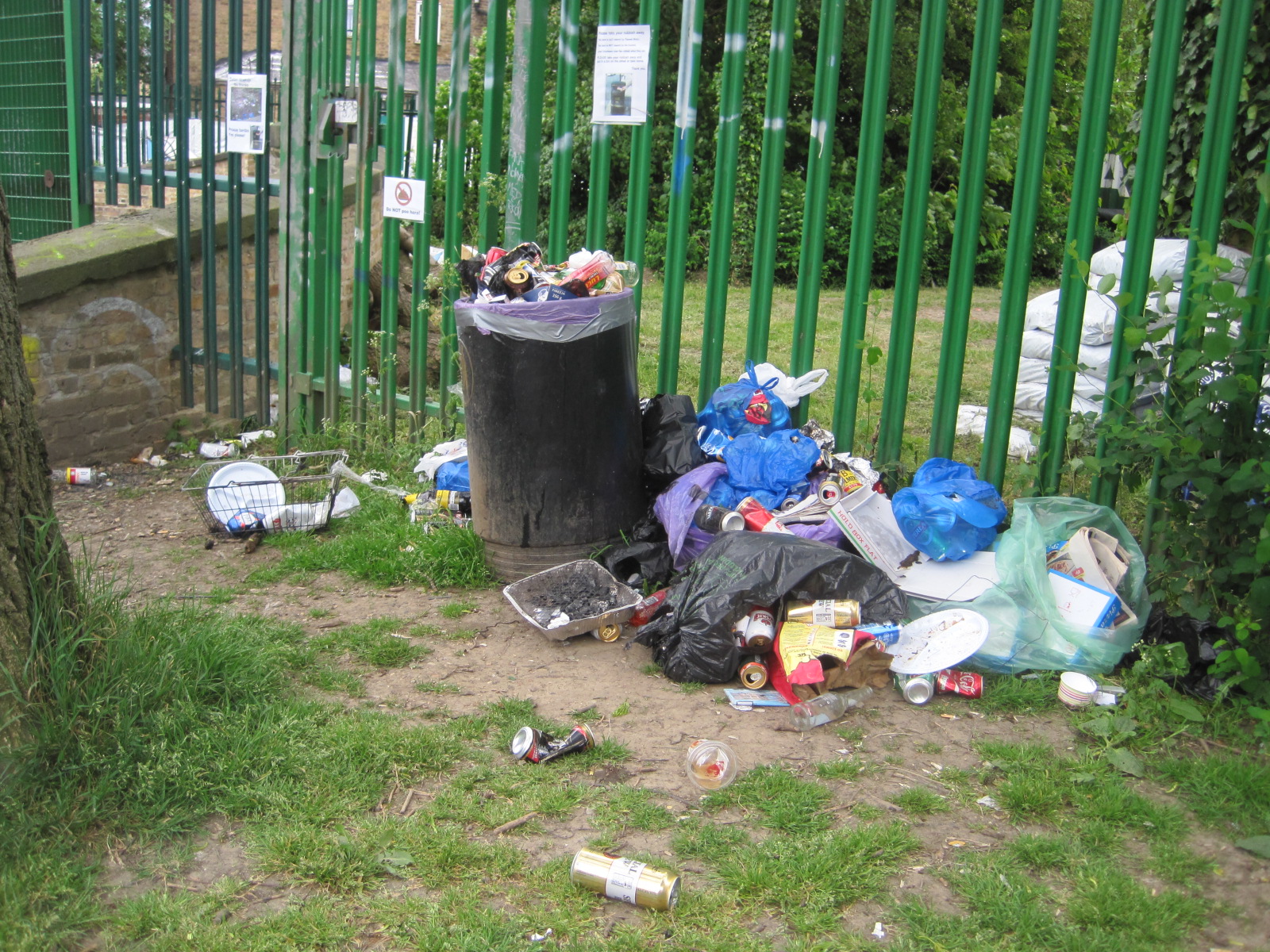 It really is so sad Caroline that this beautiful stretch of green land is being abused and spoiled for people. It also makes me so angry that good local people have to waste their valuable time cleaning up after these ignorant oiks who blight the area with their thoughtlessness and aggressive behaviour.

- I think one way is to work with the police to get the land declared an alcohol free zone and then enforce it strongly, along with clamping down on anti social behaviour. Zero tolerance. If there behaviour is disrupting residents as well there must be a case to be made?

- One reason they feel so confident about misbehaving is because it is shielded from Myddleton Road completely, they are hidden from prying eyes. If there was a way of making it more directly visible from the pavement and linking the path to Myddleton Road they wouldn't feel so cock sure of themselves. Having said that, I would imagine the brick structure contains something fairly important and not moveable.

A good discussion though Caroline, thank you. I hope something can be done.

I feel disgusted with the growing rubbish recently!   There seems to be a complete lack of respect for the riverbank.

Thank you for bringing this up on Bowes & Bounds.  It is indeed an ongoing problem.  My garden backs on to the New River, and the swearing and loud music,  plus dog barking is intolerable at times.  I too noticed the barbecues and smoke.   I have reported this to 101 on several occasions.

These people tend to be heavy drinkers and are generally on the river bank from about 3 pm when the weather permits.

If we can work with Thames Water and the police to have large "no alcohol" notices this could very well help the situation.

Once again Caroline, thanks for addressing this.

I think about this a lot as it's such a lovely resource that many people, myself included, are afraid to use. I walk my dog there most days - and clean up any mess behind me - but whenever I see the group of drinkers at the Myddleton Road end I turn and go back the other way. They often have a dog off the lead and are drunk and aggressive. I hate the feeling that i am allowing myself to be driven away particularly as I know that the more often all of us avoid the area, the more likely the drinkers are to return. I have tried calling the community police but I'm not really sure whether they are breaking the law and feel that the police will have more serious things to deal with. On the other half between Whittington and the new small park, there are always drug users, lots of dog shit and rubbish. Other than clearing up mess, which I do when I can, does anyone have any other suggestions about what can be done?

It is a shame that this area is being blighted in this manner.  I'm not sure what the answer is, perhaps its a combination of the suggestions made.  One thought is whether the council could be lobbied to install temporary CCTV?  It might be a short term measure and there may be issues about where it can point, but if it is visible enough it might deter people (and potentially move them on to somewhere else..?).  Perhaps the council could be encouraged by reminding them that Myddleton Road and its immediate area is a key local community resource e.g. for the market and Myddleton Rd Community Garden and if the council wishes to support regeneration it should be prepared allocate resources to protect the area, even if on a temporary basis.

Yesterday afternoon - the day before the Festival and Market - I decided that it could not look foul for that day at least.  George, my 9 year old grandson, very kindly helped me clear it all up and put the rubbish in the bins in the gym.  There was lots of human poo around the bin area - which is really horrid.  But also someone had let their dog/s foul in the M Rd Garden - more shame on them.

PLEASE, until the police and Council and TW agree on extra rules for the path etc, can anyone who is able to join a rota of Path and Garden cleaners please contact Emma at Killick Stores in Myddleton Road or reply here.  It means you would volunteer to clear it all once every 3 /4 weeks.

cctv gets vandalised with spray paint etc. It's not a deterrent anymore

Its so frustrating .... it could be such a lovely place to sit/walk, a real asset to the area.  But now I avoid it completely, as I know it will either be full of unsavoury characters drinking etc, or just full of rubbish (or worse).  Are there signs prohibiting the use of barbecues?
Matt's suggestion is a good one (of somehow making it more visible from the road), as obviously one of the reasons drinkers/druggies like to hang out there is that it is secluded.
And maybe its worth attempting to get them to move their shady activities elsewhere by re-claiming the area for the rest of us - calling a flash mob for a few weeks running?  Could the Myddleton Road market actually locate some activities on the riverbank?  Local community groups (Ramblers, Dog-walkers, Camera clubs etc) making it a regular rendezvous point?  In short, just making it a much more public place.

Permalink Reply by Alice Mason on September 1, 2016 at 13:44
I don't know whether anyone has tried the haringey app for posting pictures of dumped rubbish. They are supposed to then come round and clear. I have used this a number of times recently. Particularly with dumped sofas, fridges and mattresses (there have been about 5 on Cheshire road in the last month). I wonder if there is something which can be done around educating people around the councils services for rubbish removal.

I'm in Granville which is Enfield and the rubbish is just as bad on the half of the New River path at the end of Russel Road. This is particularly sad as there is now a small park there that was built using money raised by the community and is intended for families. It's unlikely you'd take your kids there as the rubbish - soiled nappies,picnic and otehr food left overs etc - is disgusting and the new bench is usually occupied by drinkers who leave bottles and cans everywhere. I agree with Alice that education around this would be useful.

A big problem with dumping is that Enfield council charge a ridiculous amount of money to collect. I think it's over £50 per item which almost certainly encourages people to dump in the street. Haringey may be better. When I used to live there it was much cheaper per five items and there were also occasional free collection days.