On my walk round the block - I thought I was Back Up North!

On my walk round the block I always stop at the bottom of Wroxham Gardens and look across Durnsford Road -  and imagine I am in Halifax or Burnley.

Well, it's a huge leap of the imagination, but you have to admit that the strange industrial chimney and the way the houses behind climb up the hill could fool you into believing you were back up north (apart from the mock-Tudor). 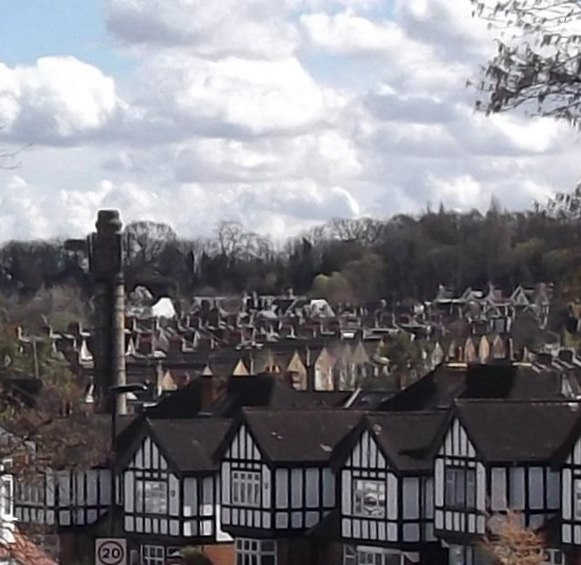 I was curious about this strange chimney, so today I went over Durnsford Road and managed to find it.

It's a really run-down building, all corrugated iron roofs and flimsy fading walls -  but it has a dishevelled, romantic charm.

I took some pics and would love to know if anyone could tell me a bit about its history.  A sign out front says that it is host to 'Visual Packaging Ltd' and despite its run-down exterior there was some activity going on. 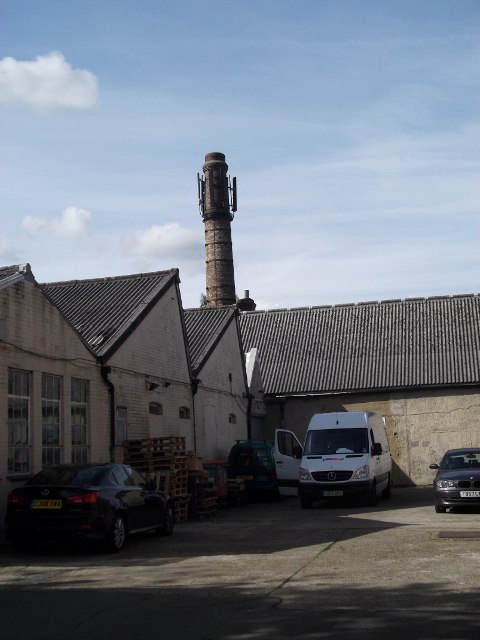 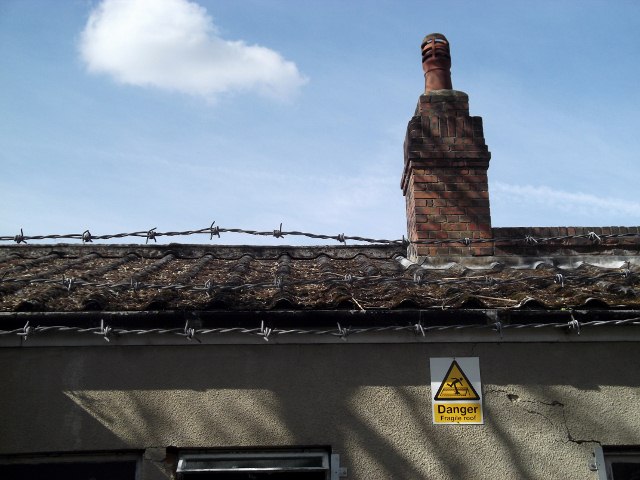 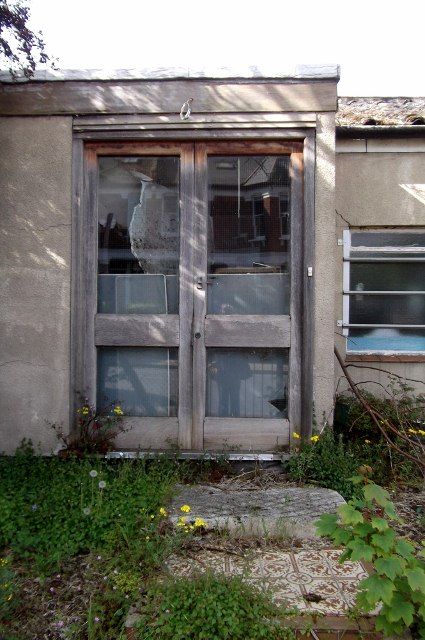 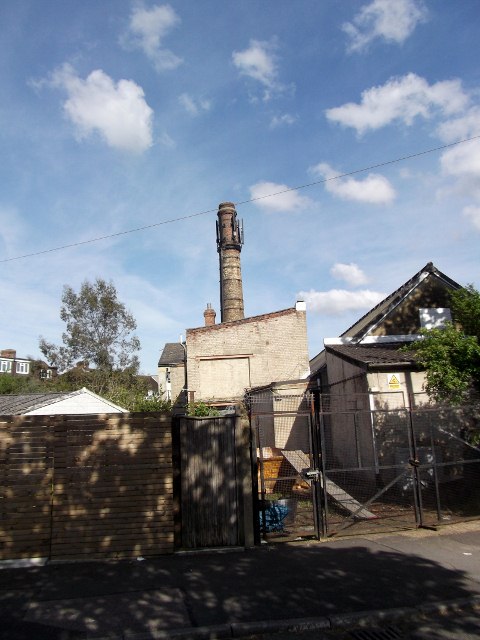 I've wondered about that chimney every time I've been to the garden centre. Now I realise I've walked past it too, cos I remember the sign and thinking it ironic that their visuals were so poor! 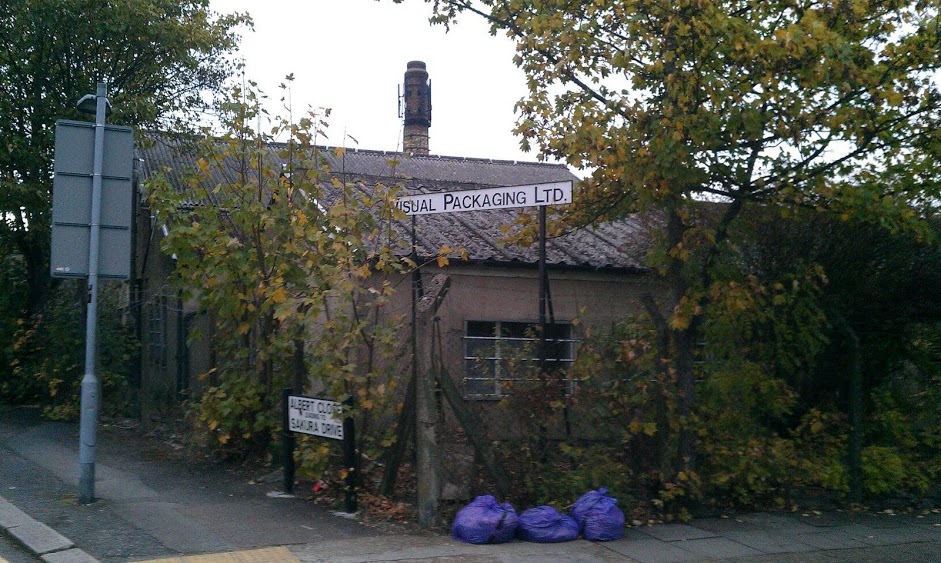 Lovely blog post - Is it really Grim up North ... London?

I had never made the connection with the view from Albert Road - but it does look quite northern industrial... and "T' Mill" in your picture is one of the very few industrial buildings we still have locally.

Initially built in the 1880s as the "Wood Green and Hornsey Steam Laundry". it was located here because, at that stage, it sat alongside the Muswell Stream which provided water for the laundry.

The Muswell Stream is fed from natural springs on the north east facing slopes of Muswell Hill - principally the "Mus Well" - or mossy well now capped and located below no. 40 Muswell Road. The stream meandered down the hillside through the park, across what is now Alexandra Park Road and along the west side of Albert Road. 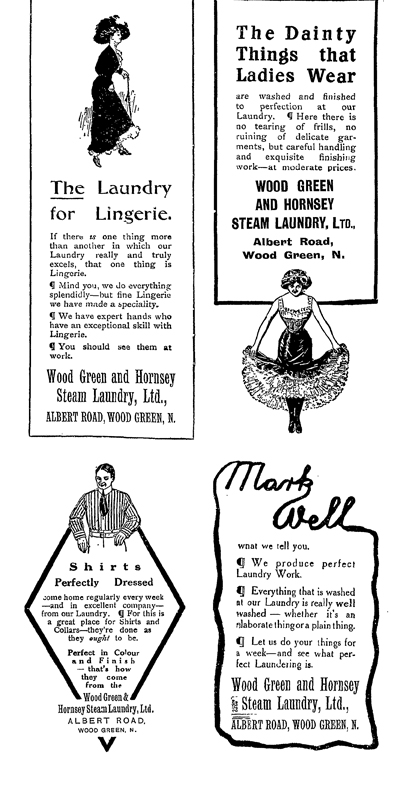 By the 1910 the Wood Green and Hornsey Steam Laundry advertised that it used "Four million gallons of water a year" and boasted "outdoor drying" as one of its attractions.

Leading up to the First World War the laundry continued to advertise its services with some  delightfully quaint press advertising.

(These are from the Palmers Green, Winchmore Hill and Southgate Recorder).

But the Laundry business was struggling and was wound-up in a high court action in 1916.

Soon after the laundry closed  more housing was developed around Alexandra Park resulting in the Muswell Stream being culverted and redirected underground.

The former laundry building was converted into a factory which produced piano parts and other musical instruments.

During the Second World War aeroplane parts were made here.

In 1952 it was a tile works and later it became the packaging company.

Whilst it hasn't been used for many years the distinctive chimney provides a mobile telephone mast.

The area between Muswell Hill and Bounds Green became particularly liable to flooding following heavy summer thunderstorms when the culverted stream was unable to cope resulting in considerable damage local housing ... and to the former laundry building.

One report tells of a major flood causing a back wall of the building to collapse and a wall of water streaming in with a cat riding the crest of the incoming wave!

To alleviate the flooding from the underground river a major scheme was implemented during the 1980s which took excess water into a huge tank located beneath Woodside Park.

A couple of years ago some work in Finsbury Gardens gave us a rare glimpse of the Muswell Stream when the pipe it runs through needed repair, Follow this link.

Like the Sunshine Garden Centre across the road (which used to be  a swimming pool) the former laundry building has changed its use over the years - but still is an identifiable local landmark.

The Recorder Newspaper was published from 1907 to 1918 each copy has been digitised and included on a searchable disc available from the Southgate District Civic Trust I am grateful to David Cooper for permission to reproduce extracts on the Bowes and Bounds Connected website,

Richard, you are an incredible source of information!!   I am really thrilled to read this - it's quite exciting to think that there's a hidden stream around the area.  If only we could bring it back in some form or another.

So, like the factories up north, this little gem depended on a water source too. Was the chimney for steam I wonder?   I like the photograph of the construction of the huge water tank - I wonder if, in centuries to come, people digging will think they've found another terracotta army?  (a boring one, granted!)

Thank you so much for find this out.

Tom, I come from Leeds, so I might know the chimney you are talking about!   I  love factory chimneys and I wrote an article about them which you might find of interest as it concerns the structure:  It's here if you wanted a read.

Tom, those pics are fabulous!  I haven't seen that one.  I'm glad to see it's listed.  I love the picture of the stone stairs winding up, and the old van is great - I am sure a restorer would be keen to get to it!  And to see the old spindles just lying there....

A great restored mill is Saltaire - it's one of my favourite places to visit and if you've been there you will agree that they've done a fabulous job.  It now houses a huge collection of David Hockney paintings - the whole village is a World Heritage site.  At the risk of boring you  here's an article on it.

Thanks Richard for this fascinating information. The underground reservoir is not dissimilar in design to the underground Roman Basilica Cistern in Istanbul - shows how little things have changed!

Our back gardens in Belsize Avenue flooded suddenly and mysteriously on a dry day a couple of years ago. Not much, just a couple of inches. Perhaps that was the Moselle. BTW, Finsbury Gardens is built over the New River, is the Moselle there too?

As the New River is a controlled part of London's drinking water other tributories and streams were kept seperate and not allowed to flow into it so the Moselle could not merge here but is diverted above in the pipes. Hi Tom - thanks for this.  It would be lovely to see the photos - especially the tiling.  It would make a lovely industrial museum or community social history venue perhaps?  I wonder how it will all work out...

Thanks so much for all your information, much appreciated.

Thank you very much for this very interesting piece. I often wondered what the chimney's purpose was for when, as a lad, I used to walk to the Albert Rd recreation park and the Durnsford Rd Lido (now garden centre).

Started by Penny Woods in Community News and Information 10 hours ago. 0 Replies 0 Likes