"Rebels Against Injustice" Local activities of the Suffragette movement A recent article on the excellent PalmersGreenN13.com website includes details of a raucous incident that took place 98 years ago this week at Palmers Green Triangle where, according to the local newspaper: ...something rather more lively than the scenes to which staid and respectable Palmers Green is accustomed occured.

An angry mob of locals broke up a meeting of the Women's Social and Political Union who were campaigning for votes for women. One of the speakers, Herbert Goulden was pelted with eggs and flour; Goulden was a brother of Emiline Pankhurst and a Winchmore Hill resident.

The PalmersGreenN13 article links to a fascinating and detailed investigation into the background of Sufferagette activity in Palmers Green by Ruby Galili.

In addition to the history of the movement in Palmers Green there are several archive references to suffragettes in Bowes Park- the local branch was led by a Mrs Neal from Goring Road who was also an active participant in the Co-Operative Women's Guild. 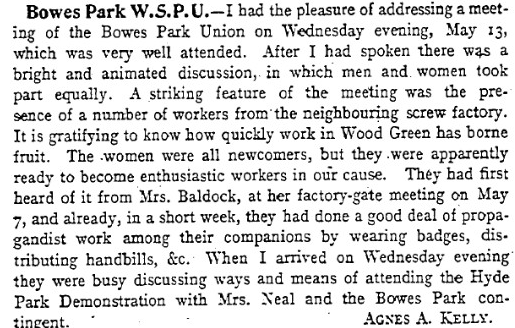 October 1907 a report in "Votes For Women" the newspaper of the WSPU written by suffragette organiser Agnes A Kelly spoke of the growing local activism.

In the news item Agnes Kelly writes of preparing for
"The Hyde Park Demonstrations" The Museum of London's Exploring 20th Century London Website features a Sash in the purple, white and green colours of the WSPU worn by Agnes Kelly on 21 June 1908 when she attended Women's Sunday, the first set-piece demonstration organised by the Women's Social and Political Union.
(Click images right for more info)

Also in the collection of the Museum of London is a small brooch in the shape of a hammer engraved Votes for Women which was presented to Agnes Kelly on her release from Holloway Gaol to commemorate her part in the Suffragettes Window smashing campaign. According to a report on the BBC website:

On the afternoon of 1 March 1912 around 150 women were standing in front of shop windows and government offices in London's West End and simultaneously took hammers and stones from their pockets and smashed the windows,

A report from April 1914 (a couple of months before the Palmers Green fracas mentioned above) refers to a meeting of the "Womens Freedom League" in Avondale Hall, Palmers Green (this was near the site of Palmers Green High School) The group were a breakaway from the WSPU led by Charlotte Despard who addressed the meeting saying: "We are militants, we defy the Government". (follow link to read the full article)

Whilst they were indeed militants willing to break the law, the Women's Freedom League was a completely non-violent organisation that opposed the WSPU campaign of vandalism against private and commercial property.

Strange to think that the streets round here were part of a battleground for the rights of women to take an equal part in the electoral process - even stranger is what seems now an obvious situation was so violently opposed by some local residents.

Do have a look at the article on the Palmers Green N13 site.

So interesting, Richard - thanks for sharing.

Thanks for sharing this article.  I really enjoyed reading it.