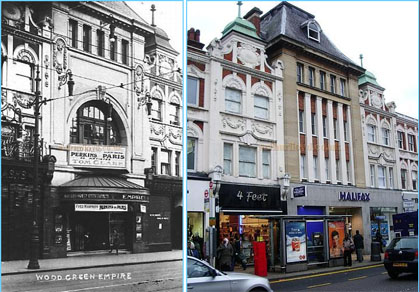 The Wood Green Empire, built in 1912 was a popular music hall, all polished brass and red velvet, it must have been quite grand compared to the drab domestic surroundings of most of its patrons during the period of the Great War.

The building is still standing in the High Road (it's now the local branch of the Halifax Building Society).

A popular place for a bit of escapist entertainment and spectacle the Wood Green Empire was a regular stop on a national circuit of music halls; it featured a roster of comedians, dancers, acrobats, singers and "speciality acts".

The 1,800 people gathered in Wood Green on Saturday March 23rd 1918 were there to witness a particular favourite, Chung Ling Soo, was billed as "The World's Greatest Magician, in a Performance of Oriental Splendor and Weird Mysticism" He was an immensly popular illusionist who had built an exotic  reputation as an Oriental Man of Mystery.

However the reality was a little more prosaic. William Ellsworth Robinson, an American entertainer, changed his name to Chung Ling Soo (a variation of a real Chinese stage magician - Ching Ling Foo) - it wasn't only Ching's name that was appropriated; several of his performances were copied too and taken on a European tour in the newly created persona of Chung Ling Soo. He was accompanied by his wife in the adopted Chinese guise of Suee Seen.

Throughout his career Robinson kept up the pretence that he was  Chinese, always speaking through an interpreter and never using English onstage.

That night in Wood Green Chung Ling Soo was well into his performace, dressed in colurful silk robes on a stage with gloriously exotic dragon backdrops. His audience were captivated by the series of stunning illusions - The Chinese Ring Trickand other favourites until he reached the climax of his show. 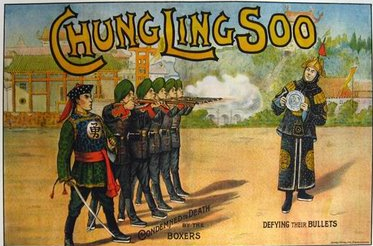 This was his most famous performance called "Condemned to Death by the Boxers" which replicated a scene from his invented life. He claimed that during the Boxer Rebellion he was captured and condemned to death by firing squad.

This was the famous "bullet catch" routine. In the illusion Chung Ling Soo had his assistants appear to fire a gun at him with a flash of gunpowder and smoke  and he seemed to catch the bullet in his teeth and spit it onto a plate. In fact he would secrete the bullets and he had adapted the mechanism of the guns to prevent the bullets from leaving the chamber.

That night at Wood Green Chung's stage assistants and Suee Seen showed two guns to the audience to confirm they were genuine  - a soldier in uniform in the crowd was asked to inspect and mark a bullet to be used in the shooting.

The performance continued with a increasing tension as his wife Suee Seen loaded the marked bullet into the gun. The assistants took aim at Chung Ling Soo. A bright flash and the crack of the rifles echoed around the Wood Green Empire with a puff of acrid smoke.

But instead of catching the bullet Chung Ling Soo staggered backwards "Oh my God. Something's happened. Lower the curtain."he cried  - It was the first  -and last - time since adopting the persona that William "Chung Ling Soo" Robinson had spoken English in public.

Subsequent inspection revealed that over time, a residue of unburned gunpowder had built up inside the gun and intead of a theatrical flash and smoke the bullet fired in the normal way, hitting him in the chest.

With such a wilful obscuring of the facts about his own life, rumors of a feud with other magicians, and stories of a dispute with his wife and fellow performer - conspiracy theories were quick to emerge and surround the event; but it was in fact a tragic accident.

The enduring mystery combined with drama and spectacle made the story of Chung Ling Soo rich Inspiration for Raymond Yiu’s modern opera The Original Chinese Conjorur.

In the video below - with a gloriously pompous and overblown commentary - Boris Karloff narrates one version of the story of the death of Chung Ling Soo in Wood Green. ( Incidently Boris Karloff offers us another local connection; born William Henry Pratt he grew up in Enfield and was educated at Enfield Grammar school).

The life story of Robinson "Chung Ling Soo" - particularly the ending of it - is a dramatic and bizzare one. His colourful career as a performer and his self-created history somehow seems to prefigure the gruesome theatrical ending of his story almost a century ago in Wood Green..

Special thanks to Matthew LLoyd www.arthurlloyd.co.uk for use of Wood Green Empire image

That is amazing!  I love that film...and even if its not true, I love the bit where the lover is disappointed when she sees him out of character...  he looked good as a Chinese man.

Started by Stefanie in Tradespeople Recomendations 5 hours ago. 0 Replies 0 Likes