The History of Bowes Park Station

Bowes Park Station dates from 1880 - it was built as an additional station on the already existing GNR line. In a recent article in The London Railway Record Peter Kay provides a detailed history.

Having refused a station in the area when the line was built in 1871 The GNR board were finally persuaded to add a station at Bounds Green which was built at a cost of £3,805 and opened on November 1st 1880. The original plan was to have a station on Bounds Green Road, however it was actually built 250 yards further north with access only from side streets (Ireland Place and Herbert Road).

The change of location and name came in a late stage of the planning - the name reflecting the growing residential development of Bowes Park under the guidance of Alderman Sidney, a former Lord Mayor of London and distinguished Whig and Liberal MP.

Bowes Park is unusual in its construction - being the only island platform on the Hertford Loop. This means that a foot bridge was needed to access the platform; this construction initially also housed the ticket office. 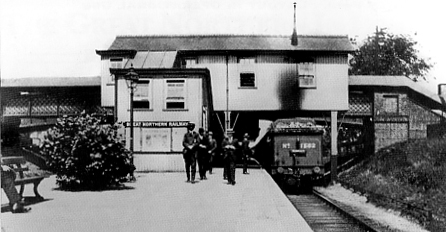 For a period there were two bridges over the rail line - just a few yards apart - which seperated rail passengers from pedestrians passing over the tracks. this second bridge was removed in the 1970s.

Bowes Park was, in its time, a very busy station - and only began to see a decline in passenger numbers with the opening in 1932 of Bounds Green station on the the extension of the Piccadily Line to Cockfosters.


Find more photos like this on Bowes and Bounds Connected


Thank You!
Many thanks to Jim Connor of Connor and Butler publishers of the Railway Record who gave permission for us to reproduce the article and Photographs here - and in particular to Caroline Simpson who brought it to my attention