The official opening of Wood Green Shopping City by HM Queen Elizabeth II on May 13th 1981 marked a significant shift in the local retail landscape - including setting in train the demise of Myddleton Road.

The 30th anniversary of the opening was widely celebrated. The current management of "The Mall" marked the moment by relocating the original plaque unveiled by the Queen.

However its easy to forget that today's all too familiar shopping centre was a revolutionary concept for the UK when it was planned and built.  The town centre mixed development comprising residential, car parking, a library and office space -alongside retail was innovative in a landsacape where most shopping was still carried out in discrete shops along linear high streets.

The closure, in 1963 of the LNER Palace Gates Railway Line including the Noel Park Station meant that a large amount of town centre land became available for the major re-development envisaged.  The plan was to bridge the main road and integrate a new indoor shopping centre with the existing high street.

It wasn't just the physical plans for using the space that were innovative - the design of the project included the local authority working in partnership with commercial developers to ensure profits from the project were made available to benefit the whole community. However the ambitious plans to completely redevelop the town centre were not without difficulty as the British Pathe archive newsreel footage below demonstrates. (click on arrow icon, bottom left, to play)

The complex finacial arrangements between large, profit-driven corporate investors and a local authority keen to maximise local advantage were fraught. The end result was that Haringey Council had to pick up the bill for much of the development, (how things have changed... who could now possibly imagine financial institutions causing a crisis which resulted in a local authorities having to cut public expenditure!). 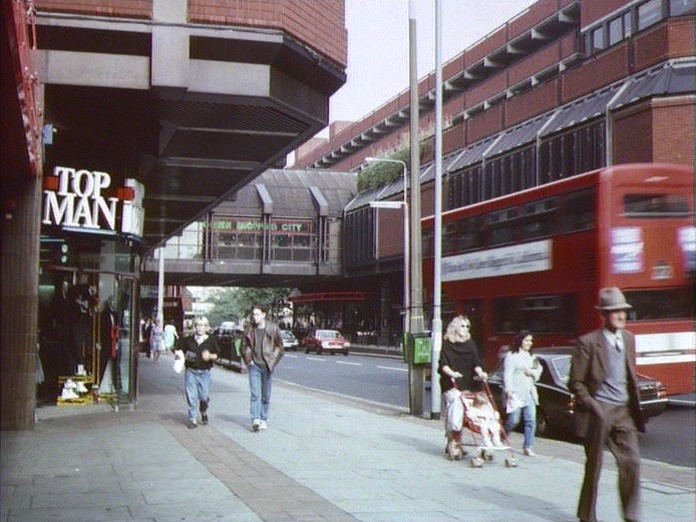 Wood Green's Shopping City was still new and interesting enough to feature heavily in the BBC Domesday Project in 1986.

The project - one of the first mass participation digitally based initiatives - attempted to capture a snapshot of ordinary life in communities across the UK.

Over one million volunteers took part with much of the cataloguing of each area done by schools. The Wood Green Shopping City features heavily in our local section of the project. It is identified as "unique" because of the "village in the sky" - the residential units above the shops.

Another local feature celebrated by the Domesday researchers in 1986 was Tony's Tea Bar at Ducketts Common- They wrote:

A well known land mark in Wood Green is the Tea Bar on the west side of Ducketts Common. The Tea Bar is owned by a gentleman called Tony. He has owned the Tea Bar for seven years. He sells coffee, tea, sandwiches and rolls. Some of his customers are from well know television programmes.

A decline in the fortunes of the shopping centre following the recession of the early 90's resulted in the sale to its current owners. In recent years they have made some significant changes, extending the building and adding a cinema.

Whether you enjoy the Shopping Mall experience, or not the centre is home to the biggest concentration of shops for miles around... and is always very busy - seven days a week.

As the economic cycle moves around, circumstances have again seen retail take a downtown. Wood Green High Street now has a few empty shops. Within Shopping City whilst some major casualties of the recession - e.g. Woolworths - have gone, they have has managed to keep most units occupied.

A new campaign launched this week aims to  revive Wood Green's image and celebrate the independent businesses in the area. In a local newspaper article campaigner Tamara Palmer explains how she hopes to encourage more community-minded business alongside pop-up shops, portable retuarants and creative initiatives.

What are your memories or stories of shopping in Wood Green?

Wood Green Past by Albert Pinching

Great article Richard. Glad you found a place for the 70s video we unearthed. I'll post an excerpt from your blog and a link back from Harringay Online. I'm sure folks will be interested.

For people interested in Tammy's campaign, she started things off with a post on HoL so B&B members can connect with her there if they want to get involved.

Although it is rather useless to complain about it now, the Palace Gates rail corridor should have been kept - it might by now have been part of an orbital light-rail or tram line from East Finchley - Ally Pally - Seven Sisters and South Tottenham (Overground Line).

I lived on the Harringay Ladder in 1984-5 and remember Wood Green Shopping City as a new, shiny and quite good shopping centre - there was a DH Evans where Primark is now, and I remember a cafe at the bottom of the escalator outside Boots (long before the days of coffee chains). I think there may have been a C&A where TK Max is now. On the other side of the road I remember a Presto supermarket where Argos is now.

Welcome news about the planned revamp of the High Street. Back then in the mid-80s it had a much better range of shops: there was even a Habitat half way down towards Turnpike Lane. At the top end, I remember the much trumpeted opening of Safeway (where Morrisons is now) in what was a state-of-the-art modern supermarket building!

Behind what is now the cinema complex opposite WG tube station there was a Do-It-All DIY warehouse. Since moving back to the area a year ago, I've been trying to remember what there was in the mid-80s where the actual cinema is now. Can anyone put me out of my misery?

Comment by Michael Cordwell James on June 17, 2011 at 16:58
Very interesting!  I remember the outdoor market where the cinema is now, and the undertakers visible in the old photo was there up until that development.  There were also public loos at Spouters' Corner and the taxis use to have a kind of private road this to turn around which was relocated to ranks opposite Morrisons.  Intriguing to see there was a cinema on the site way back then too!

i for one dislike the mall, what was wrong with the existing high st which Still exists? its not fit for purpose because the pavements are too narrow and filthy, there are too many bus stops and the roads are full of holes. when will the section of road from Turnpike Lane to Wood Green bus station be "bus free"? tram lines are still there, dig em up!

Traffic free High Street great in principle but where would the traffic go? Most likely it'll be shunted on to Wightman Road and Hornsey Park Road. Not viable for people living there.

im all for cars using the route to get from a-b, im just against 100 different bus routes all trying to make it on a single track road. I am speaking from a cyclist point of view and a harringey resident and i think that the rule of Bus has right of way needs to be addressed, a HGV pulling out infront of someone on a bike is dangerous driving, its only a matter of time before someone is wiped out by a bus

I well remember the opening of the Shopping City back in 1981. There was a painting competition at school (I was in Bounds Green Junior school at the time) and my best friend at the time won and had the opportunity to have his picture displayed at the opening and to meet the queen as she walked through.

On the day I would have loved to have taken a few pictures of the queen, but all I had was a 110 camera... with one exposure left on the film! No matter how much I begged my mum, that's all I was to have. Could you imagine an event such as that happening today and only taking one picture?!