Just sharing this, from Caroline Simpson of the BPCA. Fascinating stuff! 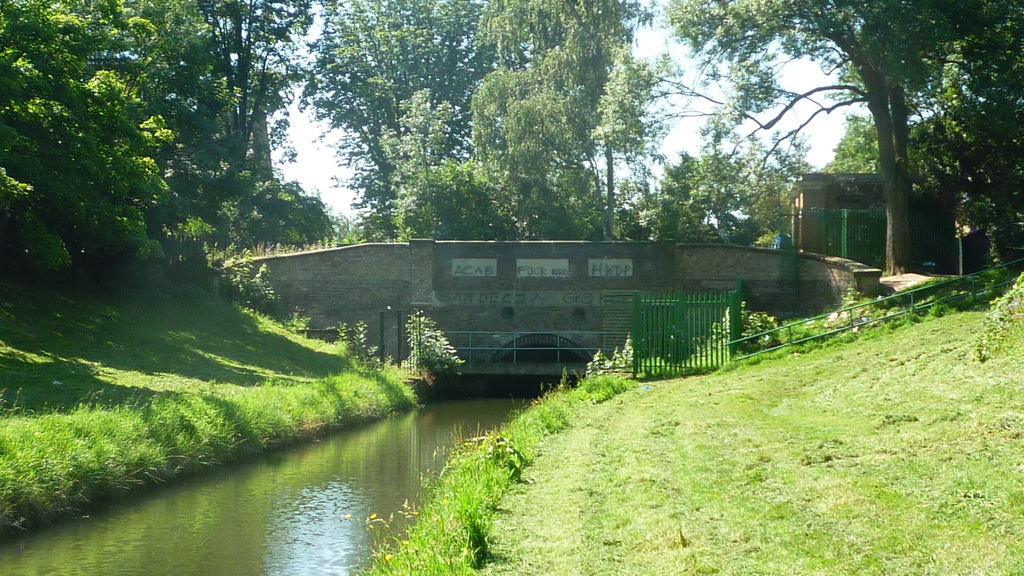 "As many local people will know, we have a brick-built tunnel which carries the New River under a rise in the ground between Myddleton Road and Station Road, Ally Pally.  This usually gets inspected once every ten years or so, but hasn’t been done since the early 90s. This used to involve a chap going through on a flat-bottomed boat and inspecting the brickwork – which is the high quality work for which Victorian engineers and brickies were famous.  Health and Safety regulations mean that the boat cannot be used, and so the tunnel is to get its very first full clean-out since the tunnel was finished in 1858 during this next inspection.
Starting Monday 17th, a damn will be created just outside the tunnel entrance in Myddleton Road, with another at the Ally Pally end.  The water will be drained out and the fish carefully put into the water at either end.  154 years of sludge and general rubbish will then be cleared out of the circular, pipe-like tunnel – an estimated 400 tons!  Then the brickwork will be inspected and repaired or re-pointed where necessary, and then the damns taken down and the water will flow again.
In order to get the debris and sludge out of the tunnel Thames Water contractors will install a large vacuum tube at the Myddleton Road end – above the tunnel entrance.  This will bring the debris up to tankers which will take it away.  The sludge will be sorted, and any cans and bottles and prams and non-biodegradable rubbish removed, and the rest will be turned into fertilizer.  There will be a similar installation at the Ally Pally end.
Just in case there are still a few bats roosting in the tunnel, the work of actually clearing the tunnel cannot be done my machines, and so we are back to time-honoured traditions of men with shovels and wheel barrows who will go in and out the 1km length of the tunnel.  An average of 70 men was employed in 1857 and 1858 making the Tunnel; far less will be employed cleaning it out.
The work is likely to take 4-6 weeks.  During this time the New River Path between Whittington and Myddleton will have to be closed.  People living and working in properties adjacent to this section of the New River and the tunnel entrances will get a letter in the next few days from TW explaining the works and giving contact details should they wish to know more.
Do take extra care crossing Whittington Road to the Garden as there will be big tankers coming in and out of the TW land.  They will also be using the land behind the painted gates for parking – and then we hope to install the gym soon after they have left.
It will be messy, hard work, but will help ensure the safety and viability of our wonderful 150 year old Victorian treasure for another 150 years.
I am sure that any offers of tea and cakes would be much appreciated by our temporary workers."

The river has been dammed, generators hum, long pipes eagerly suck 150 years of mud and sludge onto huge tanker-lorries which go to and fro 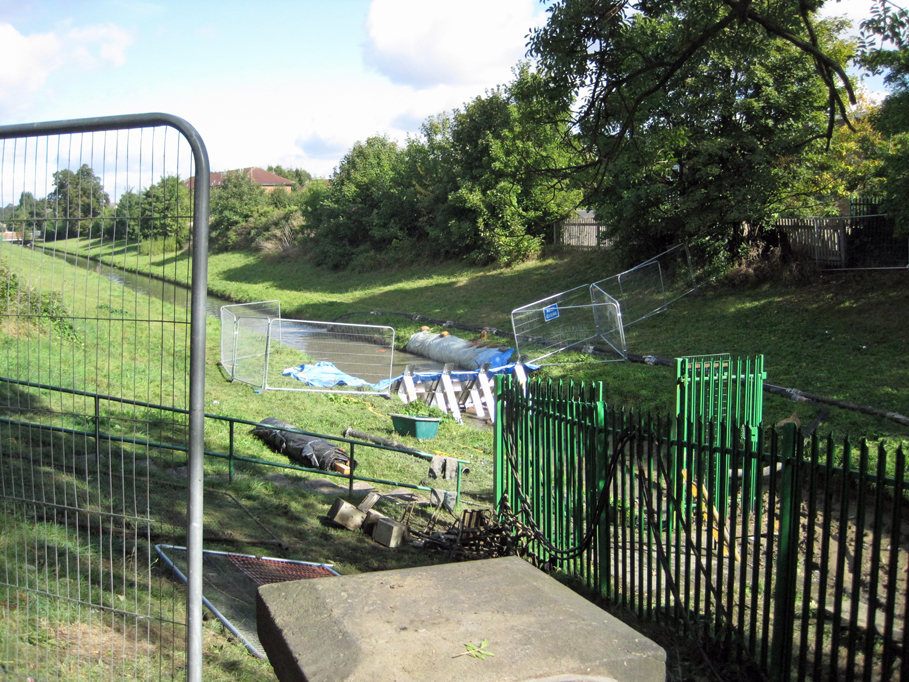 While it is two men with waders and shovels who do the hard and very mucky work. 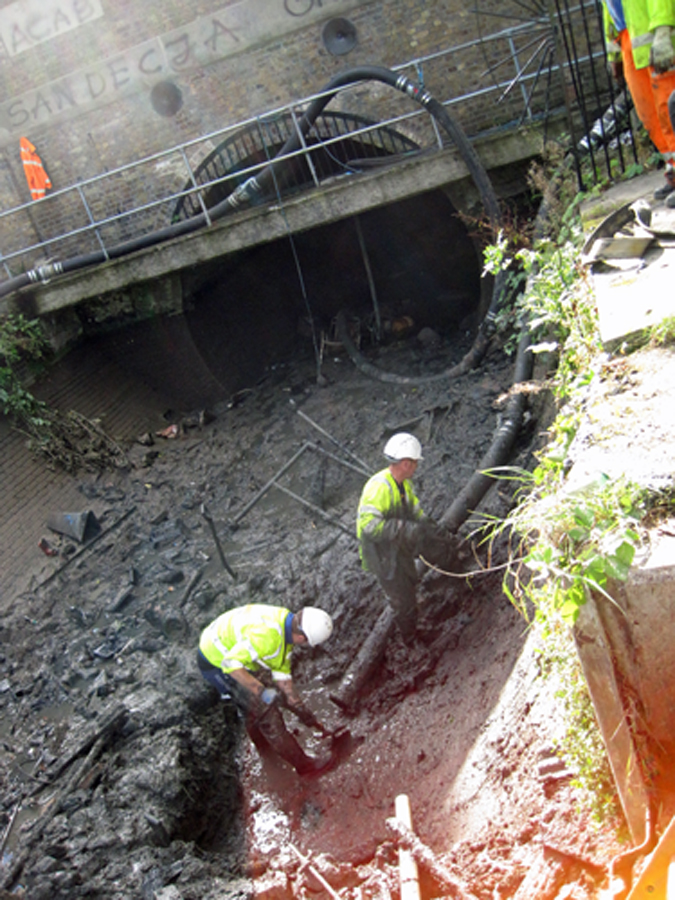 An historic photo of men working on a Thames dredger shows that some things don't change. 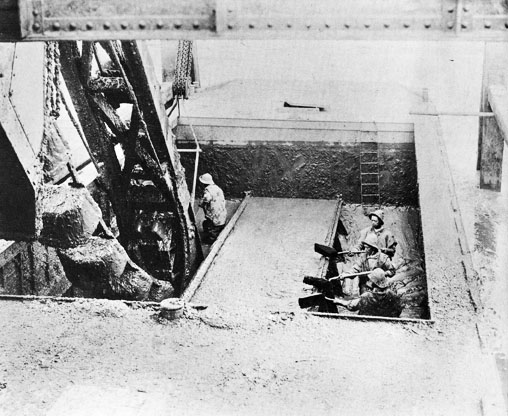 It is fascinating to see, revealed for the first time since water started to flow in 1859, the floor of the circular brick tunnel/canal.  The brickwork is perfect.  Well done those Victorian brickies!

Near the entrance to the tunnel are a lot of large pieces of rubbish, hundreds of bottles and bits of metal etc. which all have to be pulled out by hand before the chaps shovel the sludge into the mouth of the pipe-sucker.  They expect that further into the tunnel it will nearly all be general sludge.  At present there are only two chaps working, but when there is a clearer area and further into the tunnel, there will be a team of eight.

They really do deserve buns and cakes!  All edible gifts gratefully received. 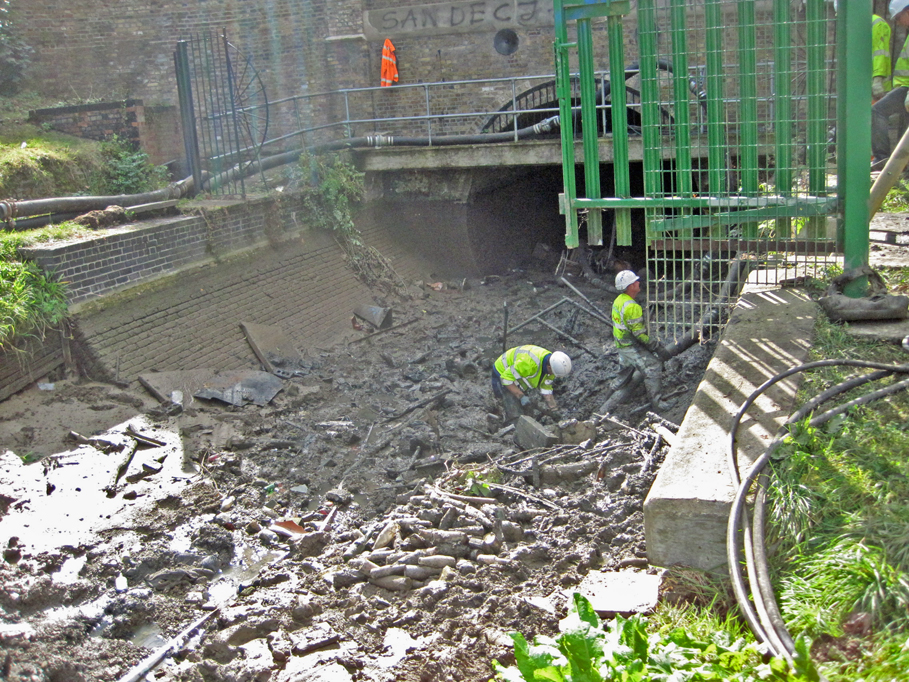 Oh that was a wonderful article - thanks so much!  I passed there on Sunday evening going down from Station Road and quite a few people were looking through the railings and we all wondered what was going on.   I wonder if any local archaologists will be looking around at some of the stuff that might be in amongst the dross?   Love those Victorians!

Brilliant! - I've been dying to know how things are going.

It's been a long-term gripe that I have not been able to see the tunnel entrance - or the river generally - as the "kissing gate" entrance prohibits wheelchair access.  I understand that keeping some wheeled visitors out is a good thing though.......

It’s going to be well over 400 tons! Work is going well clearing the tunnel. They are in about 110m from Myddleton Rd and about 130m from Station Road. So they have cleared about a quarter of the 1km tunnel and over 250 tons have already been shoveled and sucked and taken away in huge tankers.

At the Myddleton Road end, the team of 8 men actually doing the dirty work take it in turns to be in the tunnel. There are not so many bits of metal and solid objects as they go further in but the build up of sludge at this end is naturally greater than the down- stream end. They have fished out two guns – handed to the police – a number of knives and lots of glass bottles and miscellaneous metal. All a reflection of the varied and colourful life in Myddleton Road. I guess a bottle enthusiast would have fun dating and categorising the bottle collection – 150 years of them.

The main problem has been stopping the water urgently trying to get to the thirsty people of North London. They have had to move the dam a few times, and still there is slightly more than a trickle. Sections of the bank have fallen in because there is no longer any pressure from the water and yet continuing pressure from the sloping bank. Here are also some photos from the last inspection which was done by boat. 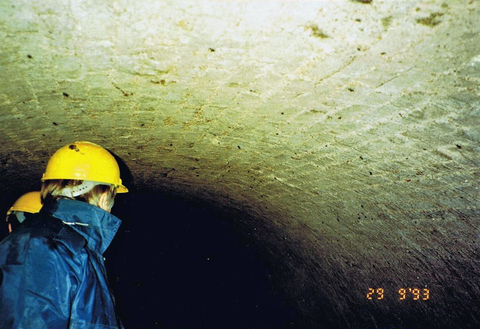 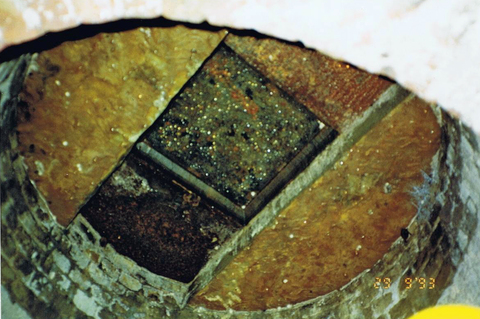 In one of  the inspection photos there is a white spot in the centre of the photos. This is not a scratch on the neg’. It is the other end of the tunnel! You can see the light at the far end if you look down the tunnel from the metal bridge at the tunnel entrance. What
amazing Victorian engineers and brickies.

To say thank you to today’s workers clearing our listed tunnel – do take some buns or
a cake. They deserve it! 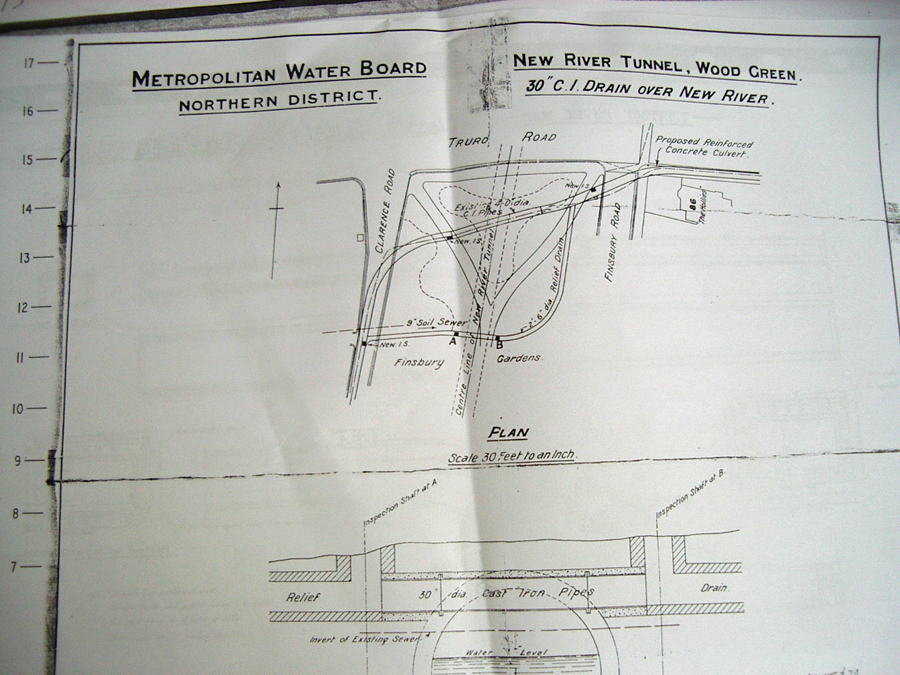 This is amazing! Totally fascinating, thank you so much for posting!

Any chance of an illustrated talk - or a BPCA special edition - when the work has finished?

Eagerly awaiting the next installment

Around 1000 cubic feet of sludge has come out and gone to be used on fields and gardens.
The muddy men are 300m in from the Ally Pally end, and about 270m in from Myddleton Road end - over half way now.  The deposit in the Myddleton Road end at this 270m point is now up to the men's upper chests!  That is far deeper than they had thought it would be.

There are no update photos this week, but perhaps the attached drawing of the section of the tunnel from the Metropolitan Archives might interest readers. This portrait is of the engineer who was responsible for the New River works, William C. Mylne, F.R.S. Architect – Civil Engineer.   The 1852 works were themselves only part of huge New River Company improvement works designed by the Company’s chief engineer, William Mylne.  Mylne started working for the company in 1803 when he was appointed as assistant Engineer to his father.  In 1810 he became superintendent of the engineering department and worked for the company until his death in 1863.


Before Mylne took over, water from the New River was distributed via a system of cisterns and elm pipes. He proposed that the elm pipes, which could be easily vandalised and the water stolen, were replaced with metal ones.  It sounds simple, but just imagine?

The photo below of a long cut-and-cover tunnel being made for the Southern Outfall, Woolwich to Crossness, in 1905, shows how our tunnel would have been made, but ours would have required more digging to excavate the trench to put the brickwork in. 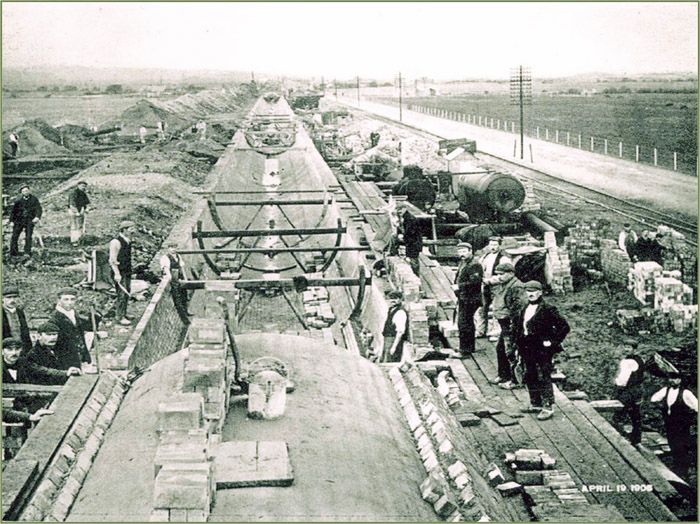 Buns and cakes for muddy men would be much appreciated

There's currently a smaller scale version of this taking place at a short bridge section near Heartlands Secodary school. There's the constant sound of the pumps there too. From your explanation the pumps are there to suck out the sludge.

Has the flow of the canal been stopped to allow for the maintenance work; or is the water also being pumped around the temporary blockages?

Started by Penny Woods in Community News and Information 19 hours ago. 0 Replies 0 Likes