Elvis Costello is quoted as saying: "Writing about music is like dancing about architecture - it's a really stupid thing to want to do." but ignoring this advice a short series of articles will try to record a little of Our Musical Heritage. Part 1 Wood Green Jazz Club

Our local area has a bit of hidden history as a location for the performance and recording of music stretching back over many years.

We have before touched on the Wood Green Empire Music Hall opened in 1912, but soon after the end of the Great War in the early 1920s theatre style performance was complemented by a dance hall. 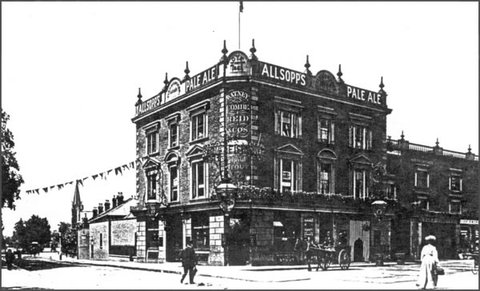 The Bourne Hall was built as an extension at the back of the Fishmongers Arms on the corner of High Road and Trinity Road.

It remained a popular venue for dances and musical entertainment over many years. Sadly the large hall at the back of the pub was demolished during its transition into its current use- as flats and a police station - to be replaced by the new small houses that form Dogan Terrace.

It is reputed that "Famous Belgian" and Jazz Guitarist Django Reinhart  played here in 1938.

But the real musical heritage starts soon after the end of the second World War in the late 1940s with the opening of Art and Vi Sanders Wood Green Jazz club in Bourne Hall "Englands Finest Rhythm Rendevous" claims the membership card proudly!. Perfectly positioned to be a core part of the late 1950s Traditional Jazz revival the club attracted the stars of the era including Kenny Baker, Humphrey Lyttleton and regular appearances from the Alex Welsh band and George Melly.

The Jazz club provides the setting for a classic British documentary film called “Momma Don’t Allow”, made by Tony Richardson and Karel Reisz – part of the post war “Free Cinema” movement and now recognised as an important part of in the development of British cinema.

This is an excellent film – capturing the emergence of a separate youth culture as Britain moved out of post-war austerity and "teenagers" began to be identified a distinct sub-species!

The film follows a number of local working-class young people as they finish their work as butchers or cleaners, get dressed in their fashionable finery and head out for a night at the club where the Chris Barber Band were performing.

It’s well worth the investment of 20 odd minutes...especially the bit towards the end of the first half when all the posh kids from Muswell Hill turn up at the Jazz Club!

Gradually the music fashions began to change as Trad Jazz gave way to R&B, blues and rock - which is covered in part two of this short series on our local musical heritage.

Incredible! Thanks so much for this.

Thanks so much Richard for making B&B such an interesting place to visit.

My parents and brother moved from Streatham to a police house in Fletton Road in about 1943, when my brother was one. I was born in 1945.

I have a photograph of me at about 2, with a broken arm in a sling in a pushchair holding bottles of Orange Juice and Codliver oil. The picture was used by the government to encourage parents to give them to their children. They were available free. Both my brother and I went to Bounds Green Primary school. I still have a class photograph in which I was puIling a funny face - everyone else was behaving.

We moved to a new, wonderful Police House in Morton Way in Arnos Grove in 1952, at which time I started at Walker Primary School which was brand new. My class was the oldest class. Each year my class moved up and the school welcomed new  pupils in year 1. The Headmaster was the wonderful Harry Hayward. My brother went to Minchenden Grammar School, where I went at age 11..

Skipping ahead to tell the real reason I wanted write this note. In about 1962, my brother and joined the fantastic Wood Green Jazz Club run by the wonderful Art and Vi Sanders. I still have my membership card. We loved the atmosphere and were great Alex Welsh fans.

Both my brother and I ended up studying in Brighton, me at the new Sussex University and my brother at what was then the College of Technology, now Brighton University. We organized the Brighton Federation students' Rag Ball in 1964 at the Metropole in Brighton. The Moody Blues were the headline band but we decided that we deserved a reward for our efforts and hired the Alex Welsh Band as a supporting group. As Lennie Hastings would have said: Oooh Yah, Oooh yah!

Thanks Art, Vi and the Alex Welsh Band for wonderful memories.

Both my brother and I went overseas to work and live but our memories of Wood Green Jazz Club will never fade away.

(I found this website as I am trying to write a family history. You will probably not hear from me again. Thank you Richard McKeever for your articles.)