See attached letter from Joanne McCartney, London Assembly Member for Enfield and Haringey to the TfL Commissioner. No new developments as yet but at least the issue is being raised. I'll post again if I hear anything further about a response

Life is getting tough at the top...was Wilmer Way bridge the last straw?

Thank you for your email to Joanne McCartney and for highlighting the disparity between the answer the Mayor has provided Joanne and TfL’s response below. Please accept my sincere apologies for the delayed response, Joanne has been waiting for a response from Peter Hendy, TfL Commissioner which I wanted to include so you have a full outline of action taken.

Just to provide an update on the latest action regarding this issue:

·         Joanne submitted a question to the Mayor in October 2014 after raising this issue repeatedly since March 2014, and was informed that the restriction will be lifted by April 2015.

·         Joanne asked for an update on the works and whether the restriction had been lifted in April 2015, and received the following response: “Investigations into the causes of the problems with the footbridge’s stairs have been ongoing in recent weeks and months and have meant our original target date for the lifting of the restriction has now passed. While at the moment I cannot provide a specific date, I can confirm that the footbridge is to be addressed as a priority scheme and that we are aiming to complete this remedial work this year.”

·         Joanne has since received confirmation that the restriction has not been lifted but TfL at the moment cannot provide a specific date, but can confirm that the footbridge is to be addressed as a priority scheme and that they are aiming to complete this remedial work this year.

·         Joanne has sent a letter (attached) to Sir Peter Hendy, TfL Commissioner expressing her concerns and dissatisfactions on the length of time it has taken for this issue to be rectified.

·         Joanne received a response from Leon Daniels, Managing Director to say that investigations were still ongoing yet a timeline of the investigations and works was still not provided.

Joanne is still not satisfied with the response received by Leon Daniels and has replied to be provided with a date of when they believe that the stairs will be fixed and open. I will keep you updated on this issue and please do not hesitate to get in touch if you have any further questions.

Email received today + letter from Boris attached. It's a long timescale but I suppose a timescale nonetheless:

Further to our previous correspondence on the issue of the closed stairs on the Bowes Road footbridge, I am pleased to say that the Mayor and TfL have now provided Joanne McCartney with a timeline for the repairs of the footbridge including an end date.

TfL expect the work to be completed by 29th March 2016. I have attached the Mayor’s response to this email for your information which contains a breakdown of the information.

I appreciate that this issue has been going on for a very long time now and Joanne has stressed repeatedly to the Mayor and TfL that the lack of information and time taken to repair the fault is unacceptable. Hopefully this will be the final timeline in this saga and TfL have assured Joanne that they intend to ensure that similar structural failures do not occur again.

Joanne will continue to keep an eye on this issue and urge TfL to ensure that the footbridge will be repaired on time and with assurances that this fault will not occur again.

Please do let me know if you have any further queries or concerns.

Thank you for posting, Louca-Mai.  The Mayor's response could be interpreted as quite vague, along the lines of 'we'll do it some time this financial year'.  On the other hand at least your (and Joanne McCartney's) persistence has resulted in TfL committing publicly to a timescale.  I dread to think how much cash it takes to support such a prolonged dispute between TfL and its supplier.  I have to say I quite like the design of the bridge (imposing though it is), and its function to connect the community should be flawless, its a pity a flaw in its engineering has caused it to become temporarily unloved.

It is indeed a vague response and also gives no reasonable explanation for why it's taken them so long to not even start planning the work  - just endless arguing about whose fault it is. In the meantime around 50 young children have just started at the Bowes nursery provision in the new site at Broomfield school + the two reception and one y1 class also based on the site. 2/3 of these children live on the other side of the north circular and have to cross the bridge twice a day. I'm one of them and having to cross via the ramps with two almost-4 year olds until at least next March is not a minor inconvenience, it's a pain in the a**e I could well do without!

Thanks for the update on this seemingly endless saga.  It's hard to believe how this problem could have taken so long to resolve.  It's a bridge, for goodness' sake, not a space rocket.  Given that the fault became apparent within a year or so of the bridge opening, I only hope that the designer and/or contractor are responsible for all the costs involved, not the poor bleeding council taxpayer.  The chances of finding that out are probably even lower than the problem being fixed quickly.  No doubt it is all 'commercially confidential' - the classic cover-up when something becomes too embarrassing.

As an amateur student of human nature, my assessment of the reasons why this pathetic saga of incompetence and indifference over a couple of metal pins is heading towards its third year is that (a) TfL do not care (b) the bridge designers do not care (c) the construction contractors do not care and (d) the Mayor's office do not care. Given such a huge burden of not caring, it is amazing that Joanne McCartney and local councillors and concerned residents have got this far, so give yourselves all a pat on the back. It is indeed possible that the bridge might be fixed, but if so I suspect it will be only because the various parties are tired and embarrassed with maintaining a show of action when nothing is happening. That is a million miles away from any of these people actually caring about the quality of the work they do, and going the extra yard. IMHO.

Thanks for the pat on the back but this whole sad saga really doesn't deserve any congratulations at any level. Yes you're right, Joanne, Achilleas, Yasemin and I have pushed time and again to get TFL to act...but it's flabbergasting that it's taken so much time and effort to get such a tiny matter sorted. The reason they give? Well I've explained it in the past - some dispute between TFL and their contractor. But as we locals all agree, that's not our problem!! Surely they should have fixed this years ago and sorted out responsibility for paying for the repair subsequently amongst themselves. Even if Enfield Council had zero role to play in this affair, I'm embarrassed for the public sector as a whole to see this kind of self-absorption and incompetence. Amazing (ie amazingly bad). The public sector can and must and will do better than this

Whilst Bowes and Southgate Green Ward residents have complained at lack of action, those living on the A10 at Turkey  Street (Enfield Crematorium) may have a different opinion: 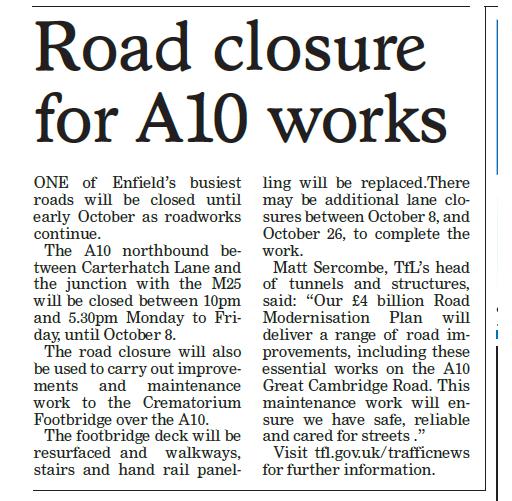 [A10] Great Cambridge Road (EN1) (Both Directions) between [M25] Junction 25 and Carterhatch Lane - various phased restrictions and closures between 2200 and 0530 weekday nights during road resurfacing works. (info deleted for clarity)

This ridiculous saga rumbles on! I emailed Joanne McCartney AM for Enfield and Haringey for an update and just received this reply:

Further to our previous correspondence regarding the closure of the stairs on the Bowes Road pedestrian footbridge, Joanne McCartney AM recently requested an update on the works and has now received correspondence from Transport for London (TfL) [attached]

TfL have informed Joanne that in investigating the initial problem they have identified unexpected issues with the original design and construction of the footbridge, which has further extended the analysis phase of the works. This means that the start date for the repair works on site have been delayed. TfL currently expect to start some preparatory works just before the end of March 2016, with a view to beginning the main works in early April, after the Easter break.

I will be in touch again as soon as Joanne has received a response from the Mayor but please do not hesitate to get in touch if you have any further questions.